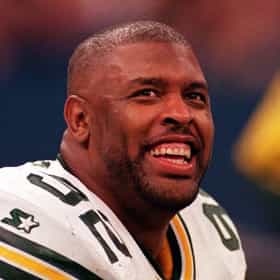 Reginald Howard White (December 19, 1961 – December 26, 2004) was an American professional football player who played defensive end in the National Football League (NFL) for 15 seasons during the 1980s and 1990s. He played college football for the University of Tennessee, and was recognized as an All-American. After playing two professional seasons for the Memphis Showboats of the United States Football League (USFL), he was selected in the first round of the 1984 Supplemental Draft, and then played for the NFL's Philadelphia Eagles, Green Bay Packers, and Carolina Panthers, becoming one of the most awarded players in NFL history. The two-time NFL Defensive Player of the Year, 13-time ... more on Wikipedia

Reggie White is ranked on...

#451 of 926 People who voted for Reggie White... People in the Midwest are 2x more likely to vote for this People We Wish Were Still Alive 3.3M VOTES RIP to our world's greatest achievers, those who changed the way we live and the ways we thought. This list of people we wis...
#2 of 59 The Best University of Tennessee Football Players Ever 9.7k VOTES The Tennessee Volunteers are one of the most successful teams in NCAA history. Their 49 bowl appearances (3rd all time), 25 ...
#10 of 79 The Best NFL Player Nicknames 3.6k VOTES The best NFL player nicknames evoke everything you need to about the kind of player you're talking about. Whether you're dis...
#8 of 1,556 The Best Football Players Ever 1M VOTES One of the hot topics of debate not only among NFL fans but pundits as well is who is the best football player of all time. ...
#44 of 95 The Greatest Out of Shape Athletes in Sports 14.4k VOTES The greatest out-of-shape athletes don't fit the mold of the typical athlete with toned limbs and six-pack abs yet they cont...
#31 of 144 The Best Carolina Panthers of All Time 50.3k VOTES Here are the best Carolina Panthers of all time, ranked from best to worst by the Ranker community. This list incl...
#1 of 48 The Best NFL Players From Tennessee 511 VOTES Here’s a list of the best NFL players from Tennessee! Some of the best players in NFL history have come from Tennessee, incl...
#50 of 146 The Best NFL Players To Have Their Numbers Retired 8.4k VOTES These are the best NFL players to have their numbers retired by the team where they made the biggest impact. Not every playe...
Famous People Named Reggie & Reginald 15.1k VIEWS Have you ever realized how many famous people named Reggie there are? We put together this list of celebrities named Reggie ...
Athletes Who Became Wrestlers 49.7k VIEWS Let's get ready to rumble! When excelling at one sport wasn't enough, these professional athletes became wrestlers. Several ...
Athletes Who Have Appeared On Wheaties Boxes 58.1k VIEWS Wheaties boxes have been featuring famous athletes since 1934, and the cereal has helped many pro sports figures become hous...
#1 of 34 The Best Athletes Who Wore #92 433 VOTES The best players to wear 92 as their jersey numbers are sprinkled across all major sports. It has been a popular jersey numb...

Reggie White is also found on...