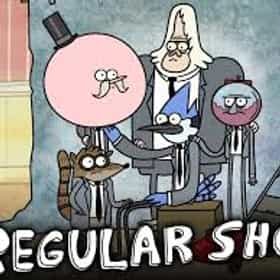 Regular Show is an American animated television series created by J. G. Quintel for Cartoon Network that premiered on September 6, 2010. The series revolves around the lives of two friends, a blue jay named Mordecai and a raccoon named Rigby—both employed as groundskeepers at a local park. Their regular attempts to slack off usually lead to surreal, extreme, and often supernatural misadventures. During these misadventures, they interact with the show's other main characters: Benson, Pops, Muscle Man, Hi-Five Ghost, Skips, Thomas, Margaret, Eileen, and CJ. Many of Regulars Show '​s characters are loosely based on those developed for Quintel's student films at California Institute of the ... more on Wikipedia

The Best Episodes of Regular Show 5.6k votes List of the best Regular Show episodes, as voted on by other fans of the series. Starring Mordicai the Blue Jay and Rigby th...
16 Times Regular Show Spoke to Your Post Collegiate Malaise 261 votes Regular Show is a cartoon about a blue jay and a raccoon working at a park with a bunch of other weirdos. And somehow, it's ...

Regular Show is ranked on...