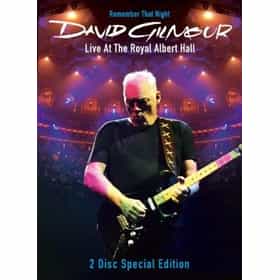 Remember That Night is a live concert recording of Pink Floyd guitarist David Gilmour's solo concerts at the Royal Albert Hall on 29, 30 & 31 May 2006 as part of his On an Island tour. The title is taken from a line in the song "On an Island". It has been released on both DVD and Blu-ray formats. The DVD version came out 17 September 2007 in the UK, Europe and Australia, and on 18 September 2007 in the USA and Canada. The Blu-ray version was released on 20 November 2007. The DVD has subtitles for spoken portions of the DVD in Dutch, English, French, German, Italian, Polish, Portuguese, and Spanish. ... more on Wikipedia

Remember That Night is ranked on...

#85 of 137 The Best Concert Movies 2.2k VOTES Here it is, folks: a list of all the best concert movies ever made, many of which are streaming on Netflix and Amazon Prime....
#19 of 28 The Best David Bowie Movies 3.9k VOTES List of the best David Bowie movies, ranked best to worst with movie trailers when available. David Bowie is best known for ...