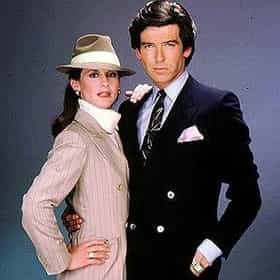 Remington Steele is an American television series co-created by Robert Butler and Michael Gleason. The series, starring Stephanie Zimbalist and Pierce Brosnan, was produced by MTM Enterprises and first broadcast on the NBC network from 1982 to 1987. The series blended the genres of romantic comedy, drama, and detective procedural. Remington Steele is best known for launching the career of Pierce Brosnan and for serving as a forerunner of the similar series Moonlighting. ... more on Wikipedia

Remington Steele is ranked on...

#13 of 67 People who voted for Remington Steele... also upvote Star Trek Franchise on The Greatest Sci-Fi Movies of All Time also upvote Linda Park on The Best Asian Actresses in Hollywood History The Best Crime Fighting Duo TV Series 23k VOTES Sometimes the best TV crime series are is based on a duo of great crime fighting duos rather than an ensemble cast or one he...
#27 of 89 The Best 1980s Primetime TV Shows 17k VOTES The 1980s had some great shows. But, which of the TV shows from the 1980s is the best? That's up to you! Vote up your favori...
#156 of 281 The Best Cult TV Shows of All Time 220.3k VOTES List of the best cult TV shows ever, ranked by their loyal fans. TV series that develop cult followings are known for their ...
#26 of 35 '80s Shows You Want To See Rebooted 1.5k VOTES With so many shows and movies being reimagined and recreated, which '80s shows would you want to see rebooted? Let's be...
#28 of 134 People who voted for Remington Steele... also upvote James Bond Franchise on Every James Bond Movie, Ranked Best to Worst also upvote Star Trek Franchise on The Best Movies Based on TV Shows The Best TV Crime Dramas 35.9k VOTES The very best crime fiction shows on television, ranked from best to worst. This is a list of the greatest crime fiction sho...
#147 of 171 The Best Mystery TV Shows 71.4k VOTES The best Mystery TV shows make trying to solve a great mystery exciting for both the fans and characters. Nothing beats the ...
#24 of 47 The Best 1980s NBC Shows 4.9k VOTES These are the best 1980s NBC shows ranked by user votes. The 1980s was a great time for NBC television programs. Really, it ...
#19 of 62 The Best TV Dramas from the 1980s 12.8k VOTES If you’re an avid television fan, chances are there's at least one 1980s drama series that you love. For the first time...
#14 of 41 The Best Action Comedy Series Ever Made 1k VOTES The best comedy action series are a rush, perfectly pairing the excitement of an action series with the laughs of comedies. ...
#16 of 23 The Best 1980s Cult TV Series 3.9k VOTES Tired of being left out of nearly every conversation your friends are having? Catch up on these classic 1980s cult TV series...
#60 of 110 The Best TV Shows Set In L.A. 2.1k VOTES Los Angeles, California is not only where most television series are filmed, but it also tends to be where they're set as we...
#28 of 104 The Best Comedy-Drama TV Shows Ever 19.9k VOTES The best comedy-drama TV shows, also known as dramadies, provide not only laughs but also heartfelt storylines. They have be...

Remington Steele is also found on...