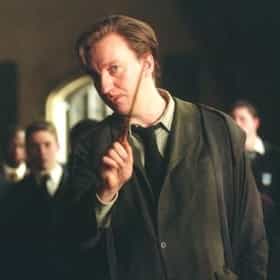 Remus John Lupin, nicknamed Moony, is a fictional character in the Harry Potter book series written by J. K. Rowling. He first appears in Harry Potter and the Prisoner of Azkaban as the new Defence Against the Dark Arts professor. In the films, he is portrayed by David Thewlis as an adult, and James Utechin as a teenager. There is evidence to suggest that Lupin is a more powerful wizard than he lets on. In Prisoner of Azkaban, he produced a handful of flames in his bare hands, a possible show of wandless magic. In Order of the Phoenix, he is the only fighter besides Dumbledore who came through unscathed from the battle at the Department of Mysteries. Similarly, he emerges physically

Remus Lupin is ranked on...

#570 of 3,792 The Best Movie Characters of All Time 1M VOTES List of the best movie characters of all time, ranked by film buffs and people like you. This list includes performances by ...
#5 of 86 The Best Fictional Teachers 14.2k VOTES There are a bunch of movies that feature teachers prominently. In most movies, teachers are a nameless bunch who often times...
#6 of 16 The Most Powerful Wizards In The ‘Harry Potter’ Franchise, Ranked 8.9k VOTES Throughout the Harry Potter films, fans are introduced to a wide array of powerful witches and wizards, some of whom&nb...
#6 of 114 People who voted for Remus Lupin... also upvote Harry Potter and the Prisoner of Azkaban on All Harry Potter Movies, Ranked Best to Worst also upvote Back to the Future Franchise on The Most Rewatchable Movies The Greatest Harry Potter Characters, Ranked 270.9k VOTES The top Harry Potter characters come from a rich universe crafted on the page and adapted to the screen, giving us some of t...
#2 of 30 People who voted for Remus Lupin... also upvote Sirius Black on The Greatest Harry Potter Characters, Ranked also upvote Rubeus Hagrid on The Greatest Harry Potter Characters, Ranked The Very Best Teachers at Hogwarts, Ranked 31.1k VOTES What are the best Hogwarts teacher? This list includes great Hogwarts teachers and professors, such as Severus Snape, Minerv...
#2 of 21 Every Patronus In 'Harry Potter,' Ranked By How Much You Wish It Was Yours 8k VOTES After sorting out how you feel about which Hogwarts house you're in and waving hello to whatever wand chooses you, cong...
#6 of 28 The Most Brutal Deaths in Harry Potter 11.4k VOTES The Harry Potter series redefined children's publishing when it hit the market in 1997. Created by J.K. Rowling, the series ...
#4 of 34 The Best Members of Gryffindor 2.5k VOTES Who is the best and bravest Gryffindor from the Harry Potter franchise? There may be differences between the Harry Potter bo...
#14 of 41 The Saddest Deaths in Kids Movies 72.7k VOTES This list of the most tragic and saddest deaths in kids movies will have you tearing up in no time. These traumatizing movie...
#8 of 30 The Greatest Teacher Characters in Film 477 VOTES Whether you were a straight-A student or spent more time in the principal's office, chances are you had a memorable teacher....
#3 of 13 The Most On-The-Nose Character Names In Movie History 280 VOTES When a description or term is on-the-nose, it means the term or name is precise or exact for the situation. Howeve...
#1 of 7 All the Defense Against the Dark Arts Teachers, Ranked 2.5k VOTES Every time a person first opened a newly released Harry Potter book, you can guarantee one of the burning questions in their...
The Cast of Harry Potter: Where Are They Now? 5M VIEWS When J.K. Rowling’s wildly-popular and bestselling Harry Potter book series was adapted for the screen, fans finally got to ...
#10 of 43 The Greatest Wizard Characters of All Time 6.5k VOTES For this poll we've created a list of the greatest wizards of all time, featuring wizards you know from movies, television, ...
How Famous Fictional Werewolves Deal With Their Moonlit Condition 1.5k VIEWS Even though werewolves are generally accepted as fiction, if you were to find yourself bitten by one of these hairy bea...
#1 of 38 The Greatest Werewolf Characters of All Time 5.1k VOTES For this poll, we've created a list of the greatest werewolves of all time, featuring werewolves you know from movies, telev...

Remus Lupin is also found on...