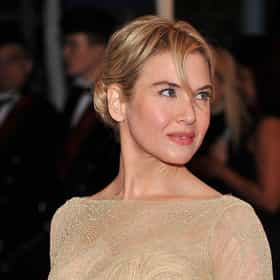 Renée Kathleen Zellweger (; born April 25, 1969) is an American actress and producer. She is the recipient of numerous accolades, including an Academy Award and three Golden Globe Awards. Zellweger was one of the highest-paid actresses in the world by 2007, and was named Hasty Pudding's Woman of the Year in 2009.Zellweger had her first starring role in Texas Chainsaw Massacre: The Next Generation (1994). She subsequently earned early acclaim with her appearance in Empire Records (1995), and gained wider recognition for her role in Jerry Maguire (1996). For Nurse Betty (2000), she won her first Golden Globe, and for her portrayals of Bridget Jones in Bridget Jones's Diary (2001) ... more on Wikipedia

Renée Zellweger is ranked on...

Renée Zellweger is also found on...