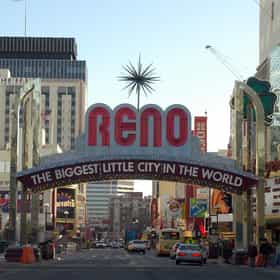 Reno is a city in the US state of Nevada near Lake Tahoe. Known as "The Biggest Little City in the World", Reno is famous for its casinos and as the birthplace of Caesars Entertainment Corporation. It is the county seat of Washoe County, located in the northwestern part of the state. The city sits in a high desert at the foot of the Sierra Nevada and its downtown area occupies a valley informally known as the Truckee Meadows. Reno is the most populous Nevada city outside of the Las Vegas metropolitan area, with an estimated population of 233,294 in 2013, and is the third most populous city in the state after Las Vegas and Henderson. Reno is part of the Reno–Sparks ... more on Wikipedia

Reno is ranked on...

#69 of 97 The Most Gay-Friendly Cities in America 73.5k VOTES List of the most gay friendly cities in the US. These large cities and smaller towns are known for their large gay and lesbi...
#33 of 77 US Cities That Should Have an NFL Team 94.5k VOTES   Of course big cities like New York and Miami have NFL teams, but there are plenty of other cities that should have ...
#239 of 372 The Coolest Cities in America 127.8k VOTES This super cool list of the coolest cities in the U.S. has been ranked by the many chill, awesome people who have visited or...
#50 of 53 The Best US Cities for Beer 7.3k VOTES There's nothing quite like a cold beer after a long day. And if you live in one of these cities, you know exactly where to f...
#14 of 56 The Best Cheap Travel Destinations 6.2k VOTES List of the Best Cheap Travel Destinations ranked from best to worst. Traveling doesn't have to be a strain on your budget. ...
Gay Events & Pride Parades Around the World 17.5k VIEWS Here is a list of gay pride parades and gay events celebrated around the world. The LGBT Community in each city plans and pu...

Reno is also found on...