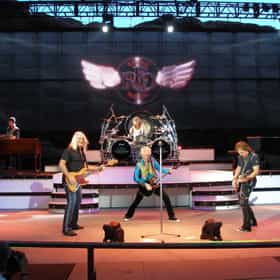 REO Speedwagon (originally styled as R.E.O. Speedwagon) is an American rock band from Champaign, Illinois. Formed in 1967, the band cultivated a following during the 1970s and achieved significant commercial success throughout the 1980s. Hi Infidelity (1980) contained four US Top 40 hits and is the group's best-selling album, with over 10 million copies sold. Over the course of its career, the band has sold more than 40 million records and has charted 13 Top 40 hits, including the number ones "Keep On Loving You" and "Can't Fight This Feeling". REO Speedwagon's mainstream popularity waned in the late 1980s, but the band remains a popular live act. ... more on Wikipedia

The Best REO Speedwagon Albums of All Time 1.4k votes REO Speedwagon are considered one of the best classic rock bands. Since they’re such an influential band, let’s rank the bes...

REO Speedwagon is ranked on...

REO Speedwagon is also found on...