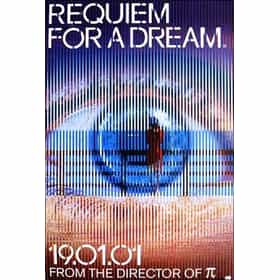 Requiem for a Dream

Requiem for a Dream is a 2000 American psychological drama film directed by Darren Aronofsky and starring Ellen Burstyn, Jared Leto, Jennifer Connelly, and Marlon Wayans. The film is based on the novel of the same name by Hubert Selby, Jr., with whom Aronofsky wrote the screenplay. Burstyn was nominated for an Academy Award for Best Actress for her performance. The film was screened out of competition at the 2000 Cannes Film Festival. The film depicts different forms of addiction, which lead to the characters’ imprisonment in a world of delusion and reckless desperation that is subsequently overtaken by reality. ... more on Wikipedia

lists about Requiem for a Dream

Requiem for a Dream is ranked on...

Requiem for a Dream is also found on...

worst year in history, think like a man, forgotten 80s movies, carolina panthers wide receivers, english actresses over 50, entire pokedex with pictures, cut movie scenes, what is the most profitable movie of all time, 1986 buick century, movies with multiple sequels