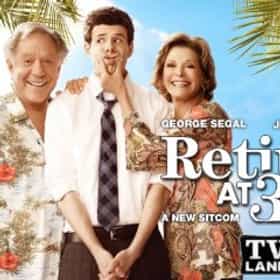 Retired at 35 is an American sitcom on TV Land starring George Segal, Jessica Walter, Johnathan McClain, Josh McDermitt, Marissa Jaret Winokur, and Ryan Michelle Bathe. It is the network's second original scripted series after Hot in Cleveland. The series premiered on January 19, 2011. On March 21, 2011, the series was renewed for a second season. The second season premiered on Tuesday, June 26, 2012, at 10:00 pm ET/PT, and concluded on Wednesday, August 29, 2012. On December 13, 2012, TV Land announced that they were not renewing Retired at 35 for another season and it was cancelled, making it the first TV Land original sitcom to be cancelled from the network. ... more on Wikipedia