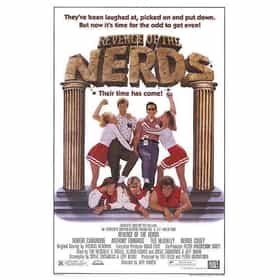 Revenge of the Nerds is a 1984 American comedy film about social life on a college campus. The film stars Robert Carradine and Anthony Edwards, with Curtis Armstrong, Ted McGinley, Julia Montgomery, Brian Tochi, Larry B. Scott, Michelle Meyrink, John Goodman, and Donald Gibb. The film was directed by Jeff Kanew. The film's storyline chronicles a group of nerds trying to stop bullying by the persecuting jock fraternity, the Alpha Betas. Revenge of the Nerds is #91 on Bravo's "100 Funniest Movies". ... more on Wikipedia

lists about Revenge of the Nerds

The 1980s "Comedy" Revenge Of The Nerds Was A Nightmare Of Homophobia, Racism, And Sexual Assault 48.7k votes Revenge of the Nerds remains one of the filthiest and funniest movies from the 1980s. It's hysterically crass in a way few H...

Revenge of the Nerds is ranked on...

#771 of 6,114 The Best Movies of All Time 5.6M VOTES These are the best movies of all time, ranked by movie experts and film fans alike. What are the greatest movies of all time...
#7 of 13 13 Comedies Where The Main Character Is Actually A Narcissistic Monster 385 VOTES Sometimes terrible people make the funniest protagonists, which is why we often find ourselves busting a gut over quest...
#111 of 336 'Old' Movies Every Young Person Needs To Watch In Their Lifetime 986.7k VOTES If you're a younger millennial, you've probably heard your older friends and coworkers say things like "Hey, you g...
#111 of 241 The Most Inspirational Movies Ever 46.7k VOTES This inspirational movies list, with videos, includes some of the most uplifting films of all time. Inspiring films do not c...
#65 of 173 Movies That Should Be Made Into Broadway Musicals 20.9k VOTES A list of movies that should be adapted for the Broadway stage. Each year, at least one or two popular Broadway shows are tu...
#2 of 119 The Best College Movies Ever 18k VOTES Any true college student should watch each of these college movies at least once. However we recommend watching each movie s...
#9 of 50 The Most Epic Party Scenes in Film History 5k VOTES A party scene in a movie can make or break the whole film. It sets up a tone (or a tone change), it reveals a lot about the ...
#3 of 23 The Funniest Comedy Movies About College 1.3k VOTES Keggers, toga parties, and pledging fraternities are just a few fun – and often funny – things about college. The top comedy...
#17 of 55 The Greatest Party Movies Ever Made 17.8k VOTES This is a list of the best party movies. These are the absolute best party films, but if you believe we missed one, please f...
#86 of 204 The Best Geek Movies 89.6k VOTES A list of the best geek movies. These are films featuring geeks, geek culture, or they're simply *for* geeks. If you believe...
#19 of 60 The Greatest Guilty Pleasure '80s Movies 10.3k VOTES Indulge your love of big hair, terrible fashion, and neon colors with this collection of guilty pleasure 80s movies. Wh...
#60 of 285 The Best Teen Movies of All Time 678.9k VOTES Need a new movie to watch? Here's a list of the best teen movies and films about teenagers, adolescence, and high school. Wh...
#33 of 96 The Very Best Shows & Movies About Revenge 554 VOTES They say revenge is a dish best served cold, but that's not the only saying about revenge. Another is that if you plan on se...
#7 of 40 The Best Movies About Nerds 5.1k VOTES Who doesn’t have a favorite nerd? And who doesn't have a favorite nerd movie? They either reminds us of a part of ourselves ...
#47 of 94 The Best Teen Comedy Movies, Ranked 25.7k VOTES This list contains information on the best teen comedy movies, ranked from best to worst by user votes. The best teen comedy...
#38 of 54 The Very Best Geeky Shows & Movies, Ranked 1.6k VOTES Whether you are one or you know some, geeks are all around us. For years, the geek has been relegated to the dark and dank r...
#17 of 102 The Best John Goodman Movies 3.5k VOTES List of the best John Goodman movies, ranked best to worst with movie trailers when available. TV fans may known John Goodma...

Revenge of the Nerds is also found on...