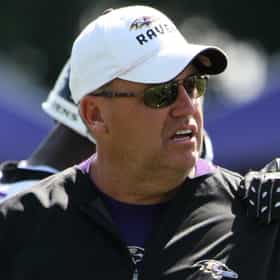 Rex Ashley Ryan (born December 13, 1962) is a former American football coach and current ESPN analyst. Ryan was formerly the head coach of the New York Jets and Buffalo Bills of the National Football League (NFL), and also held various coaching positions with eight other NFL and college teams. Ryan is the son of former head coach Buddy Ryan and is the fraternal twin brother of Rob Ryan. From a young age, Ryan aspired to follow in his father's footsteps and become a professional football coach. After spending the majority of his youth in Canada, Ryan returned to the United States as a teenager where he attended college at Southwestern Oklahoma State University. Upon graduating, Ryan ... more on Wikipedia

Rex Ryan is ranked on...

#344 of 530 Annoying Celebrities Who Should Just Go Away Already 1.2M VOTES The most annoying celebrities, ranked by entertainment fans themselves. These annoying celebs are obnoxious, overexposed, ...
#39 of 62 The Worst Sports Personalities on ESPN 38.6k VOTES As much as sports fans love to watch ESPN, sometimes religiously, this doesn't mean that all of its pundits are tolerable. I...
#10 of 12 The Best NFL Coach Rants 927 VOTES A list of the best NFL coach rants of all time. NFL head coaches are a high-strung, over stressed group and with good reason...
Famous People Whose Last Name Is Ryan 12.5k VIEWS Being a fairly common name, it's no surprise there are a lot of famous people with the last name Ryan. Do you recognize all ...
#16 of 19 The Best Buffalo Bills Coaches of All Time 1.1k VOTES There have been many Buffalo Bills coaches since the team got its start, but who is truly the best Buffalo Bills coach of al...
35+ Celebrities Who Had Weight Loss Surgery 126.7k VIEWS America has an interesting fascination with celebrity. We build up certain people to be larger than life and then follow the...
Celebrities with Learning Disabilities 121.2k VIEWS This list contains information about celebrities who have learning disabilities, loosely ranked by fame and popularity. Many...

Rex Ryan is also found on...