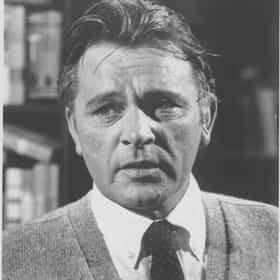 Richard Burton, (; born Richard Walter Jenkins Jr.; 10 November 1925 – 5 August 1984) was a Welsh actor. Noted for his mellifluous baritone voice, Burton established himself as a formidable Shakespearean actor in the 1950s, and he gave a memorable performance of Hamlet in 1964. He was called "the natural successor to Olivier" by critic and dramaturge Kenneth Tynan. An alcoholic, Burton's failure to live up to those expectations disappointed critics and colleagues and fuelled his legend as a great thespian wastrel.Burton was nominated for an Academy Award seven times, but never won an Oscar. He was a recipient of BAFTAs, Golden Globes, and Tony Awards for Best Actor. In the ... more on Wikipedia

Richard Burton is ranked on...

Richard Burton is also found on...