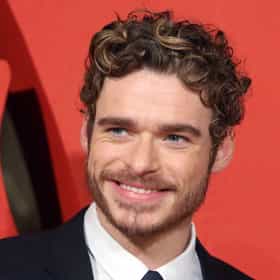 Richard Madden (born 18 June 1986) is a Scottish actor and producer. Born and raised near Glasgow, in Renfrewshire, he made his screen debut as a child actor and stage debut whilst a student at the Royal Scottish Academy of Music and Drama. Madden continued his acting career before landing his breakout role in 2011, as Robb Stark in HBO's fantasy drama Game of Thrones, for which he received the Screen International Award for Star of Tomorrow and two SAG Award for Outstanding Performance by an Ensemble in a Drama Series nominations, amongst other accolades. His subsequent roles include leading the first season of the historical fiction series Medici: Masters of Florence (2016) as Cosimo ... more on Wikipedia

Richard Madden is ranked on...

#22 of 53 People who voted for Richard Madden... also upvote Game of Thrones on The Best Shows Currently on the Air also upvote X-Men Franchise on The Best Superhero Movies Ever Made The Best Scottish Actors Working Today 79.8k VOTES There have been plenty of great Scottish actors throughout film history, but which male Scottish actors working today are th...
#17 of 61 The Best Scottish Actors of All Time 71.9k VOTES Scotland isn't just about whiskey, it's also the home country of many of Hollywood's top actors. This list of the best Scott...
#42 of 99 Time's 100 Most Influential People Of 2019, Ranked 23k VOTES From actors and singers to activists and politicians, here is Time's 100 Most Influential People of 2019. While you mig...
#2 of 33 The Hottest Guys on Game of Thrones 64.1k VOTES Game Of Thrones,  a fantasy show on HBO based on a series of novels by George R.R. Martin, also stars some of the ...
#18 of 41 Who Should Replace Ben Affleck As Batman? 19.4k VOTES Who can play Batman? Lots of actors can play Bruce Wayne and his alter ego, and a whole bunch have actually done so, from Ad...
#14 of 45 The Best Living Scottish Actors 3.6k VOTES From McAvoy to McGregor, there are tons of amazing actors alive today who all hail from the country of Scotland. Hollywood h...
#25 of 43 Actors Who Could Play Han Solo 4.6k VOTES on May 9, 2016, it was announced that Alden Ehrenreich was cast in this coveted role. Learn more about him here! When it co...
#17 of 29 The Biggest Snubs Of The 2019 Emmys 341 VOTES The 71st Primetime Emmy Award nominations are in and even though many great shows and awesome performances were recognized, ...
#3 of 10 2019 Golden Globe Best TV Actor Nominees 128 VOTES It's awards season and the nominations for the 2019 Golden Globe best actor in a television series are in so you can make yo...
Actors Who Were Not Happy About Their TV Characters Dying 54.6k VIEWS There are several reasons why a TV show might kill off a character. Perhaps the actor was difficult to work with,&...
Times You've Seen the GoT Actors Before 3M VIEWS We imagine every character in George R.R. Martin's universe in a certain way. Likewise, as more and more characters are real...
Stars React to Alan Rickman's Death 24.8k VIEWS When Alan Rickman died on January 14, 2016, fans, friends, and those who knew him took to social media to share tributes and...
How Stars Of Hit TV Shows Reacted When They Learned Their Characters Were Dying 14k VIEWS Few actors are actually angry about being killed off of popular TV shows - apparently it’s pretty tough to be...
What Happened To All The Actors Who Were Brutally Murdered On Game Of Thrones? 21.7k VIEWS Warning: spoilers ahead for Game of Thrones! Games of Thrones proved it could break all the rules during the penultima...

Richard Madden is also found on...