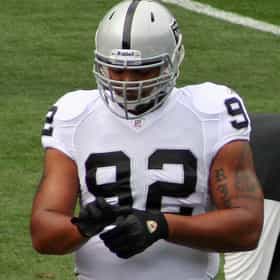 Richard Vershaun Seymour (born October 6, 1979) is a former American football defensive tackle who played in the National Football League (NFL). He played college football for the University of Georgia, and was drafted by the New England Patriots sixth overall in the 2001 NFL Draft. Seymour played in seven Pro Bowls, was named to five All-Pro teams, and was a member of three Super Bowl-winning Patriots teams. During his career he was considered one of, if not the best, defensive lineman in the NFL.Seymour was selected to the Pro Bowl both as a 4-3 defensive tackle and as a 3-4 defensive end. He occasionally played fullback on short yardage and goal line situations. However, this ended ... more on Wikipedia

Richard Seymour is ranked on...

Richard Seymour is also found on...