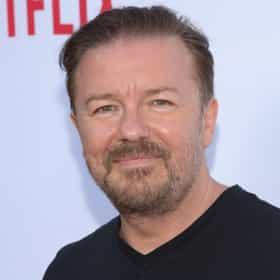 Ricky Dene Gervais (; born 25 June 1961) is an English stand-up comedian, actor, director, screenwriter, and singer. Gervais worked initially in the music industry, attempting a career as a pop star in the 1980s as the singer of the new-wave act Seona Dancing and working as the manager of the then unknown band Suede before turning to comedy. Gervais appeared on The 11 O'Clock Show on Channel 4 between 1998 and 2000. In 2000, he was given a Channel 4 spoof talk show, Meet Ricky Gervais. He achieved greater mainstream fame the following year with his BBC television mock documentary series The Office. It was followed by Extras in 2005. He co-wrote and co-directed both programmes with ... more on Wikipedia

Ricky Gervais is ranked on...

Ricky Gervais is also found on...