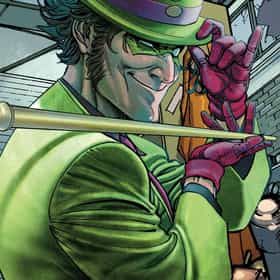 The Riddler (Edward Nigma or Nygma) is a supervillain appearing in comic books published by DC Comics, created by Bill Finger and Dick Sprang. He first appeared in Detective Comics #140 (October 1948). The character is commonly depicted as a criminal mastermind in Gotham City who takes delight in incorporating riddles and puzzles into his schemes, leaving them as clues for the authorities to solve. The Riddler is one of the most enduring enemies of superhero Batman and belongs to the collective of adversaries that make up his rogues gallery. In 2009, The Riddler was ranked as IGN's 59th Greatest Comic Book Villain of All Time. The character has been substantially adapted from the ... more on Wikipedia

Riddler is ranked on...

#881 of 3,827 The Best Movie Characters of All Time 1M VOTES List of the best movie characters of all time, ranked by film buffs and people like you. This list includes performances by ...
#19 of 660 People who voted for Riddler... People under 30 are 2x more likely to vote for this also upvote Batman on The Best Comic Book Superheroes of All Time The Best Comic Book Villains 270.1k VOTES Who are the best comic book villains of all time? This list of top supervillains in comics includes some of the most notorio...
#119 of 961 People who voted for Riddler... also upvote Batman Franchise on The Best Superhero Movies Ever Made also upvote Dark Knight Franchise on The Best Movies of All Time The Greatest Movie Villains of All Time 1.2M VOTES While some of us tend to despise movie villains, plenty of movie-goers favor some of these antagonists. Whether that's ...
#94 of 818 The Most Annoying TV and Film Characters Ever 1.5M VOTES You know them. You hate them. Honestly, who knows why these characters even exist. Did someone think they were funny? M...
#13 of 176 The Greatest Villains in DC Comics, Ranked 88.9k VOTES Here are the best DC villains ranked best to worst by comic book fans. These popular bad guys in DC Comics are the best...
#2 of 88 People who voted for Riddler... also upvote X-Men Franchise on The Best Movies Based on Marvel Comics The Best Batman Villains Ever 141.8k VOTES Batman has, arguably, the greatest rogues gallery in all of comics, so let's rank every Batman villain best to worst! Bad gu...
#24 of 31 The Best Superhero Evolution on Film 36.1k VOTES As the studios keep cranking out superhero film after superhero film things change. Drastically. Whether it's technological...
#19 of 48 The Greatest Villains Green Arrow Has Ever Faced 4.3k VOTES Green Arrow, whose alias is Oliver Queen, is one of the earliest heroes, having premiered in comic books back in 1941, thank...
#8 of 97 People who voted for Riddler... also upvote Dark Knight Franchise on The Greatest Comic Book Movies of All Time The Best Characters from Batman Comics 119.4k VOTES The DC Universe has some great characters in it, but perhaps Gotham City has some of the best. Being non-superpowered, Batma...
#24 of 44 The Best Green Characters 2.8k VOTES We’re ranking the best green characters of all time. From Shrek to Kermit, the Green Lantern and the Green Ranger, this list...
#55 of 56 The Best Superheroes To Be For Halloween 1.7k VOTES Halloween is here, which means it's time to figure out your costume for the big night. Do you go as some current meme that...
All of Batman's Deadliest Villains & Enemies, Listed 920.2k VIEWS List of all Batman villains and enemies found on this Batman villains list. This list contains all super villains Batman has...
12 Comic Book Characters With Tragic Backstories Who We Refuse To Feel Sorry For Them 7.5k VIEWS Comic books are brimming with tragic origin stories. Apparently if you didn't have your parents murdered in front of you, yo...

Riddler is also found on...