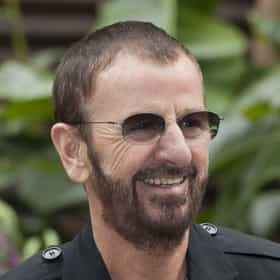 Sir Richard Starkey (born 7 July 1940), known professionally as Ringo Starr, is an English musician, singer, songwriter and actor who gained worldwide fame as the drummer for the Beatles. He occasionally sang lead vocals with the group, usually for one song on each album, including "With a Little Help from My Friends", "Yellow Submarine", "Good Night", and their cover of "Act Naturally". He also wrote and sang the Beatles' songs "Don't Pass Me By" and "Octopus's Garden", and is credited as a co-writer of others, including "What Goes On" and "Flying". Starr was afflicted by life-threatening illnesses during ... more on Wikipedia

Ringo Starr is ranked on...

#259 of 453 The Greatest Singers of the Past 30 Years 213.7k VOTES One of the most debated topics in music is who are the greatest singers of the past 30 years. Whether you're a huge Whitney ...
#63 of 299 The Greatest Living Rock Songwriters 180.3k VOTES Who is the best songwriter alive today? The musician responsible for the lyrics and music that's the most memorable, signifi...
#244 of 1,057 The Best Singers of All Time 2.2M VOTES Who are the best singers of all time? That's a tough question to ask. This list includes many of the greatest, most famous v...
#294 of 2,187 The Greatest Musical Artists of All Time 13.4M VOTES When VH1 polled fellow artists to name the greatest artists of all time, it seemed like a good idea---but in reality, the li...
#62 of 139 The Most Undeserving Members of the Rock Hall of Fame 407.1k VOTES The most undeserving members of the Rock Hall of Fame are all respectable and successful musicians and bands but quite simpl...
#130 of 279 Rank the Rock N Roll Hall of Fame Inductees 304k VOTES A complete list of bands and artists inducted into the Rock and Roll Hall of Fame, ranked in order of preference by music fa...
#334 of 854 These Poetic Geniuses Wrote Your Favorite Songs of All Time 359.1k VOTES If you ask anyone who has ever tried, it's tough to write one song, nevertheless a batch to be considered a songwriter. Add ...
#26 of 182 The Best Solo Artists Who Used to Front a Band 60.4k VOTES Music groups, no matter how successful they may become, tend to have an expiration date. When a rock band or rap group event...
#5 of 54 The Best Singing Drummers 21.6k VOTES Prepare to be impressed by this list of drummers who also sing. These musicians are both notable as capable drummers and as ...
#122 of 525 Famous Men You'd Want to Have a Beer With 1.8M VOTES If given the opportunity to sit down for a beer with any famous male figure, which famous men would you most want to get a d...
#8 of 32 Rock Stars Who Have Aged Surprisingly Well 167.9k VOTES Be it from good genes or good plastic surgeons, these best-aged rock stars prove that like a fine wine, they only get better...
#54 of 99 The Best Ever Howard Stern Interviews 37k VOTES The best ever Howard Stern interviews include several riveting segments featuring famous people revealing deep, dark secrets...
#68 of 161 People who voted for Ringo Starr... People in the Midwest are 2x more likely to vote for this These Big-Name Celebs Have Been Hiding Their Real Names 99.8k VOTES List of real names of celebrities, including actors, singers, wrestlers, and even politicians. Many actors and actresses use...
#331 of 868 People who voted for Ringo Starr... People in the Northeast are 2x more likely to vote for this Celebrity Death Pool 2016 370.1k VOTES Celebrity death pool 2016: Here's a large list of celebrities we think just might die this year. The only certainties in l...
#3 of 4 All of The Beatles, Ranked Best to Worst 4.2k VOTES You know every song by heart, from "She Loves You" to "Let It Be." And now it's time to decide: which Be...
#3 of 6 Simpsons Musical Guests and Musician Cameos 92 VOTES Musicians and bands who have guest starred on The Simspons over the years. This list contains every musical act that has don...
#91 of 411 The Best British Rock Bands/Artists 281.5k VOTES Of all the important rock bands to grace the stage, British bands are considered by many to be the most important and most i...
Celebrities Who Practice Transcendental Meditation 111.3k VIEWS A list of celebrities, both big and small, who practice Transcendental Meditation. This form of mantra meditation, specifica...
Celebrities You Didn't Know Use Stage Names 1.8M VIEWS List of celebrities with stage names, loosely ranked according to fame and popularity. It's tough to break into show busin...
#45 of 148 Dreamcasting Celebrities We Want To See On The Masked Singer 7.1k VOTES The US version of The Masked Singer has taken social media by storm and no wonder. With secret, costumed celebrities and clu...
Celebrities Turning 80 In 2020 2.5k VIEWS In 2020, celebrities born in 1940 turn 80 years old. This is a huge milestone, and what's even more impressive is that a few...
20 Rock Stars Who Married Supermodels 181.4k VIEWS This list of rock stars who married supermodels is loosely ranked by fame and popularity. The primary motivation for many yo...
Famous People Who Meditate 238k VIEWS Meditation is a practice that encourages the mind to slow down and also benefits the body and soul. Many famous actors, musi...
#60 of 153 The Best People Who Hosted SNL In The '80s 1k VOTES The 1980s started out rough for Saturday Night Live, but they rode the decade through and celebrated their 15th anniversary ...
19 Celebrities Who Married Their Fans 2.5M VIEWS It’s a tale as old as time: Boy meets girl, boy falls in love with girl. Girl realizes boy is an internationally f...
Famous People Who Have Been Knighted 751.2k VIEWS A list of famous people who have been knighted, ranked by fame and popularity by fans of British chivalry like you. Being kn...
104 Celebrities Who Have Entire Species Named After Them 62.4k VIEWS A list of organisms, including animals as well as plants, bacteria, etc., named for celebrities and other famous people (but...

Ringo Starr is also found on...