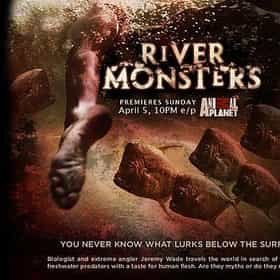 River Monsters is a British and American wildlife documentary television programme produced for Animal Planet by Icon Films of Bristol, United Kingdom. Hosted by extreme angler and biologist Jeremy Wade who travels around the globe in search of the most fearsome freshwater killers. Looking for clues, eyewitnesses and stories about people who were dragged underwater by these vicious predators, he tries to catch the biggest specimens and then release it back to the wild. His aim is to save these rare creatures from extinction and to help people understand the truth behind the horrific attacks on humans. River Monsters became the most watched, most successful programmes in Animal Planet's ... more on Wikipedia

The Creepiest Things Ever Reeled In On 'River Monsters' 514.8k views Biologist Jeremy Wade has been reeling in some of the biggest fish around the world on Animal Planet's River Monsters. The i...

River Monsters is ranked on...

#291 of 383 People who voted for River Monsters... also upvote Die Hard Franchise on The Best Movies of All Time also upvote Indiana Jones Franchise on The Best Movies of All Time The Best TV Shows of The Last 20 Years 1.5M VOTES This best TV show list represents the combined opinions of thousands of TV fans. Anyone can vote on this list of the best TV...
#105 of 256 The Best Reality TV Shows Ever 170.5k VOTES This is a list of the best reality TV shows on television, the most (often shamefully) addictive reality TV series. From g...
#18 of 88 The Most Chill Nature & Animal Shows To Watch High 249 VOTES For those of us who enjoy leaning back and getting baked while watching some good old-fashioned television, there are r...
#4 of 25 The Best Current Animal Planet Shows 613 VOTES Known for educational programs about animals and animal behavior, some of the best Animal Planet shows on now in 2019 can be...
#20 of 88 The Best Nature TV Shows 2.7k VOTES The very best nature shows on television, ranked from best to worst. This list of the greatest nature shows also includes pi...
#10 of 39 The Most Exciting Reality Shows Ever Made 429 VOTES The best reality TV shows ever aired are some of the most exciting series to watch on television, but which are the most exc...