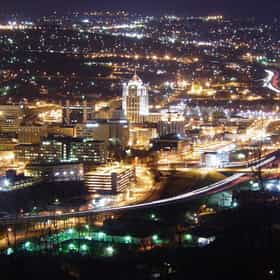 Roanoke is an independent city in the southern U.S. state of Virginia. As of the 2010 census, the population was 97,032. It is located in the Roanoke Valley of the Roanoke Region of Virginia. Roanoke is the largest municipality in Southwest Virginia, and is the principal municipality of the Roanoke Metropolitan Statistical Area, which had a 2010 population of 308,707. It is composed of the independent cities of Roanoke and Salem, and Botetourt, Craig, Franklin, and Roanoke counties. Bisected by the Roanoke River, Roanoke is the commercial and cultural hub of much of Southwest Virginia and portions of Southern West Virginia. ... more on Wikipedia

Utterly Fascinating Theories Behind The Vanishing Roanoke Colony 1.5M views The disappearance of the Roanoke colony remains one of the oldest unsolved mysteries in the United States. It all began back...

Roanoke is ranked on...

#34 of 96 The Best Southern Cities To Live In 19.6k VOTES The South has some of the coolest cities and towns to live in in the entire country. Whether it's a bustling metropolis or a...
#37 of 52 The Best US Cities for Beer 7.1k VOTES There's nothing quite like a cold beer after a long day. And if you live in one of these cities, you know exactly where to f...
#190 of 372 People who voted for Roanoke... People in the Northeast are 2x more likely to vote for this The Coolest Cities in America 127.1k VOTES This super cool list of the coolest cities in the U.S. has been ranked by the many chill, awesome people who have visited or...
All The True Stories, People, And Crimes Referenced In Every Season Of 'American Horror Story' 542.7k VIEWS One of the greatest achievements of American Horror Story, the long-running FX horror anthology, is that it truly ...
Horrifying True Stories That Are Just Like The Blair Witch Mythology 198.7k VIEWS Is the Blair Witch legend true? Is there a real Blair Witch? By now, everyone knows (spoiler) The Blair Witch Project i...