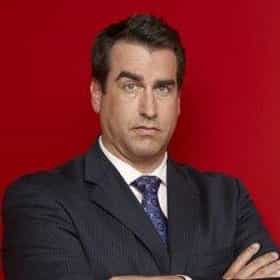 Robert Allen Riggle Jr. (born April 21, 1970) is an American actor, comedian, and retired United States Marine Corps Reserve officer. He worked as a correspondent on Comedy Central's The Daily Show from 2006 to 2008, as a cast member on Saturday Night Live from 2004 to 2005, and for his comedic roles in films such as The Hangover, The Other Guys, Let's Be Cops, Dumb & Dumber To, 21 Jump Street, 22 Jump Street, The Goods: Live Hard, Sell Hard, and Step Brothers. He has also co-starred in the Adult Swim comedy-action series NTSF:SD:SUV::. In 2012, Riggle replaced Frank Caliendo for the comedy skit and prognostication portions of Fox NFL Sunday. ... more on Wikipedia

Rob Riggle is ranked on...

#140 of 389 People who voted for Rob Riggle... People in the Midwest are 2x more likely to vote for this The Most Overrated Actors Of All Time 1.1M VOTES This list of the most overrated actors of all time, has been ranked by critics and fans from all over the world. Actors are ...
#53 of 101 The Most Beloved US Veterans 53.4k VOTES While all of our veterans should be beloved and respected, many have stuck in the public consciousness. Some became famous v...
#23 of 30 The Best SNL Cast Members of the '00s 4.5k VOTES Saturday Night Live in the 2000s saw a lot of watershed events. The 2000 presidential election figured heavy in sketc...
#13 of 15 Every Actor Who's Played Colonel Sanders, Ranked 182 VOTES In 2015, KFC created one of the most popular evergreen ad campaigns that is still running to this day. The fast-food&nb...
#15 of 53 Who Should Replace Jon Stewart as Host of The Daily Show? 6.9k VOTES UPDATE: On March 30, 2015, Comedy Central announced that Trevor Noah, The Daily Show correspondent since December 2014 will ...
The Shortest Lasting SNL Cast Members 8.7k VIEWS Since 1975, Saturday Night Live has been the dream job for aspiring comedians everywhere. However, like all dreams, sometime...
Celebrities Who Were In The Military 7.7M VIEWS The many celebrities who were in the military signed up to make the ultimate sacrifice for their countries. Through the year...
Every Single Celebrity Who Has Guest Starred on Drunk History 7.6k VIEWS Comedy Central's Drunk History has it all, from the boozy narration of notable historic moments to rotating cast members who...
52 Celebrities Who Have Visited Their Fans in the Hospital 56k VIEWS Being in the hospital is always a huge bummer, but it would definitely cheer anyone up to have their favorite celebrity visi...
#64 of 82 Former Cast Members We Want To See Host SNL 384 VOTES When Adam Sandler returned to the halls of Studio 8H in 2019 to host Saturday Night Live, many were surprised that the famed...

Rob Riggle is also found on...