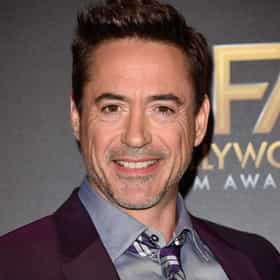 Robert John Downey Jr. (born April 4, 1965) is an American actor, producer and singer. His career has been characterized by critical and popular notoriety in his youth, followed by a period of substance abuse and legal troubles, before a resumption of critical repute and resurgence of commercial success in middle age. In 2008, Downey was named by Time magazine among the 100 most influential people in the world, and from 2013 to 2015, he was listed by Forbes as Hollywood's single highest-paid actor. His films have grossed over $5.8 billion in North America and $14.4 billion internationally, making him the second-highest-grossing box-office actor to date both domestically and ... more on Wikipedia

Robert Downey Jr. is ranked on...