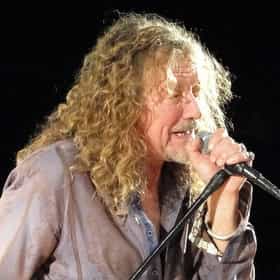 Robert Anthony Plant (born 20 August 1948) is an English singer, songwriter, and musician, best known as the lead singer and lyricist of the rock band Led Zeppelin. Plant enjoyed great success with Led Zeppelin throughout the 1970s and developed a compelling image as the charismatic rock-and-roll front man, similar to contemporaries such as Roger Daltrey of the Who, Freddie Mercury of Queen, Mick Jagger of the Rolling Stones and Jim Morrison of the Doors. With his mane of long blond hair and powerful, bare-chested appearance, Plant helped to create the "god of rock and roll" or "rock god" archetype. Although Led Zeppelin dissolved in 1980, Plant occasionally ... more on Wikipedia

12 Fascinating Facts You Didn't Know About Robert Plant 1k views Led Zeppelin frontman Robert Plant almost didn't join the now-legendary band. One of the most diverse and prolific singers i...
The Best Robert Plant Albums of All Time 1.2k votes Robert Plant is known as one of the greatest singers in rock for his work with Led Zeppelin. But his solo material has made ...

Robert Plant is ranked on...

Robert Plant is also found on...