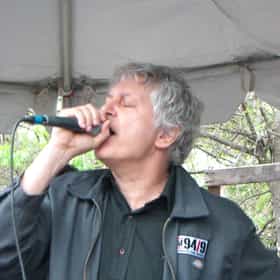 Robert Ellsworth Pollard Jr. (born October 31, 1957) is an American musician and singer-songwriter who is the leader and creative force behind indie rock group Guided by Voices. In addition to his work with Guided by Voices, he continues to have a prolific solo career with 22 solo albums released so far. With more than 2,000 songs registered to his name with BMI, Pollard is among the most prolific songwriters of his time. In 2006, Paste magazine listed him as the 78th greatest living songwriter. In 2007, he was nominated for the Shortlist Music Prize. ... more on Wikipedia

Robert Pollard is ranked on...

#189 of 299 The Greatest Living Rock Songwriters 179.3k VOTES Who is the best songwriter alive today? The musician responsible for the lyrics and music that's the most memorable, signifi...
#297 of 854 These Poetic Geniuses Wrote Your Favorite Songs of All Time 358.5k VOTES If you ask anyone who has ever tried, it's tough to write one song, nevertheless a batch to be considered a songwriter. Add ...
#28 of 115 The Best Lo-fi Bands/Artists 4.6k VOTES Lo-fi music has a number of definitions and classifications, but for the sake of this list, we're going to define lo-fi band...

Robert Pollard is also found on...