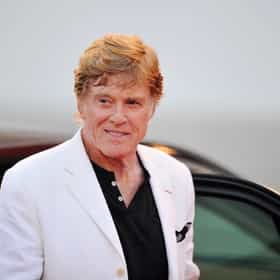 Charles Robert Redford Jr. (born August 18, 1936) is an American retired actor, director, producer, and businessman. He is the founder of the Sundance Film Festival. Redford began acting on television in the late 1950s, including an appearance on The Twilight Zone in 1962. He earned an Emmy nomination as Best Supporting Actor for his performance in The Voice of Charlie Pont (1962). His greatest Broadway success was as the stuffy newlywed husband of co-star Elizabeth Ashley's character in Neil Simon's Barefoot in the Park (1963). Redford made his film debut in War Hunt (1962). His role in Inside Daisy Clover (1965) won him a Golden Globe for the best new star. He starred in Butch ... more on Wikipedia

Robert Redford is ranked on...

Robert Redford is also found on...