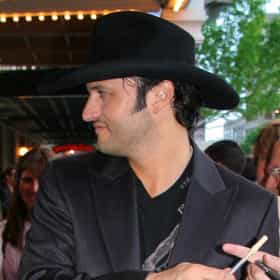 Robert Anthony Rodriguez (; born June 20, 1968) is an American filmmaker, score composer, cinematographer, film editor, and visual effects supervisor. He shoots, edits, produces, and scores many of his films in Mexico and his home state, Texas. Rodriguez directed the 1992 action film El Mariachi, which was a commercial success after grossing $2 million against a budget of $7,000. The film spawned two sequels known collectively as the Mexico Trilogy: Desperado and Once Upon a Time in Mexico. He directed From Dusk Till Dawn in 1996 and developed its television adaptation series (2014–2016). Rodriguez co-directed the 2005 neo-noir crime thriller anthology Sin City (adapted from the ... more on Wikipedia

Robert Rodriguez is ranked on...

#83 of 227 The Greatest Living Directors, Ranked 82.5k VOTES List of the best living filmmakers (though not necessarily still actively making films.) When discussing the finest director...
#194 of 783 People who voted for Robert Rodriguez... also upvote Star Trek Franchise on The Greatest Sci-Fi Movies of All Time also upvote Lord of the Rings Franchise on The Best Movies Based on Books The Greatest Directors In Movie History 300.1k VOTES List of the greatest directors in movie history, who are most deserving of Academy Awards and critical recognition. The list...
#69 of 161 The Most Overrated Directors of All Time 38.8k VOTES List of the most overacted directors in the film industry of all times. Often the success, both critically and financially, ...
#138 of 158 The Worst Movie Directors of All Time 39.3k VOTES A list of the worst directors in film history who have made some of the worst movies ever. Through a combination of luck and...
#41 of 51 Who Should Direct the New Star Wars Films? 8.5k VOTES It was announced that Disney has bought Lucasfilm for 4.05 billion dollars. Not only that, but they have also stated that th...
#13 of 60 The Best Action Directors in Film History 132 VOTES Who are the best action directors in film history? This is your chance to decide. Making good action movies is a difficult t...
Famous People Whose Last Name Is Rodriguez 5.9k VIEWS Being a fairly common name, it's no surprise there are a lot of famous people with the last name Rodriguez. Do you recognize...
Famous People Named Bob or Robert 71.5k VIEWS List of famous people named Bob, along with photos. How many celebrities named Robert can you think of? The famous Bobs belo...
Famous People of Mexican Descent 214k VIEWS Ever wonder which celebrities are Mexican? Here's an extensive list of famous people of Mexican descent loosely ranked by fa...
Celebrities Who Live in Austin 2.7k VIEWS This list includes information about celebrities who live in Austin, loosely ranked by popularity. Celebrities that live in ...

Robert Rodriguez is also found on...