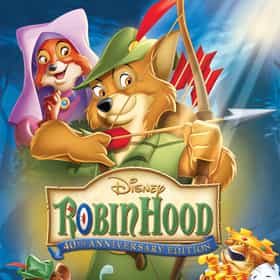 Robin Hood is a 1973 American animated film produced by Walt Disney Productions which was first released in the United States on November 8, 1973. The 21st animated feature in the Walt Disney Animated Classics series, the film is based on the legend of Robin Hood, but uses anthropomorphic animals rather than people. The story follows the adventures of Robin Hood, Little John and the inhabitants of Nottingham as they fight against the excessive taxation of Prince John, and Robin Hood wins the hand of Maid Marian. ... more on Wikipedia

Robin Hood is ranked on...

Robin Hood is also found on...