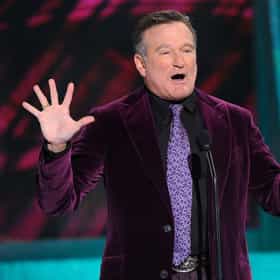 Robin McLaurin Williams (July 21, 1951 – August 11, 2014) was an American actor and comedian. Born in Chicago, Williams began performing stand-up comedy in San Francisco and Los Angeles during the mid-1970s, After rising to fame playing the alien Mork in the sitcom Mork & Mindy, Williams established a career in both stand-up comedy and feature film acting. He was known for his improvisation skills and the wide variety of memorable character voices he created. Many critics have lauded Williams as one of the funniest comedians of all time.After his first starring film role in Popeye (1980), Williams starred in numerous films that achieved critical and commercial success, including ... more on Wikipedia

Johnny Depp
The Best Ever Robin Williams Movies 74.1k votes Celebrate the actor's memory with this list of the best Robin Williams movies, ranked best to worst with movie trailers when...
Heartwarming Behind-The-Scenes Stories About Robin Williams 3.6k votes Robin Williams was one of those rare, tour-de-force performers who was able to bring a thousand characters to life - often i...
Robin Williams Loves and Hookups 1.8k views Wondering who Robin Williams dated? Then this list of Robin William romances is just for you. Before his tragic and untimely...
The Internet Remembers Robin Williams RIP 18.5k views The cathartic outpouring of social media is usually a landscape to acknowledge the death of a beloved celebrity, but on the ...
Boulevard Movie Quotes 81 votes Boulevard movie quotes follow the story of one 60-year-old man who realizes his life is nothing he imagined. The drama film ...

Robin Williams is ranked on...

Robin Williams is also found on...