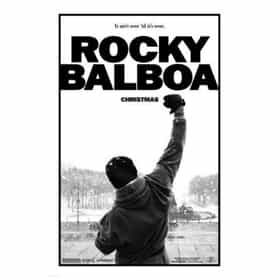 Rocky Balboa is the sixth installment in the Rocky franchise, written, directed by, and starring Sylvester Stallone who reprises his role as the title character. The sixth film in the Rocky series that began with the Academy Award-winning Rocky thirty years earlier in 1976, the film portrays Balboa in retirement, a widower living in Philadelphia, and the owner and operator of a local Italian restaurant called "Adrian's", named after his late wife. Rocky Balboa was produced as another sequel to the Academy Award-winning Rocky. According to Stallone, he was "negligent" in the production of Rocky V, leaving him and many of the fans disappointed with the presumed end of ... more on Wikipedia

Rocky Balboa is ranked on...

Rocky Balboa is also found on...