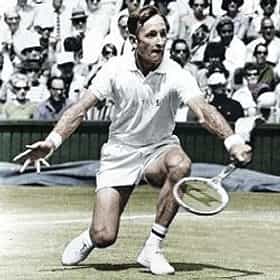 Rodney George Laver (born 9 August 1938), better known as Rod Laver, is an Australian former tennis player. He was the No. 1 ranked professional from 1964 to 1970, spanning four years before and three years after the start of the Open Era in 1968. He also was the No. 1 ranked amateur in 1961–62.Laver's 200 singles titles are the most in tennis history. This included his all-time men's record of 10 or more titles per year for seven consecutive years (1964–70). He excelled on all of the court surfaces of his time: grass, clay, hard, carpet, and wood/parquet. Laver won 11 Grand Slam singles titles, though he was banned from playing those tournaments for the five years prior to the Open ... more on Wikipedia

Rod Laver is ranked on...

Rod Laver is also found on...