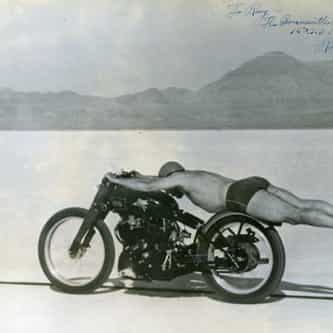 Roland "Rollie" Free (November 18, 1900 – October 11, 1984) was a motorcycle racer best known for breaking the American motorcycle land speed record in 1948 on the Bonneville Salt Flats, Utah. The picture of Free, prone and wearing a bathing suit, has been described as the most famous picture in motorcycling.After an early career in motorcycle retail, Free became a regional racer of the 1920s and 30's on Indian motorcycles. In 1923, Free tried out for his first national ... more on Wikipedia