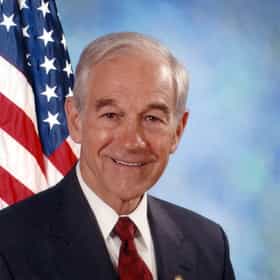 Ronald Ernest Paul (born August 20, 1935) is an American author, physician, and retired politician who served as the U.S. Representative for Texas's 22nd congressional district from 1976 to 1977 and again from 1979 to 1985, and for Texas's 14th congressional district from 1997 to 2013. On three occasions, he sought the presidency of the United States: as the Libertarian Party nominee in 1988 and as a candidate in the Republican primaries of 2008 and 2012. Paul is a critic of the federal government's fiscal policies, especially the existence of the Federal Reserve and the tax policy, as well as the military–industrial complex, and the War on Drugs. He has also been a vocal critic of ... more on Wikipedia

Ron Paul is ranked on...

#157 of 469 People who voted for Ron Paul... People in the South are 3x more likely to vote for this Famous Role Models We'd Like to Meet In Person 537.9k VOTES These are the famous folks it would be most exciting to meet in person, as ranked by the wisdom of the crowd. Some of the be...
#664 of 2,830 The Most Influential People of All Time 2.4M VOTES This is a list of the most influential people of all of human history. This means that the individuals on this list have had...
#73 of 223 People who voted for Ron Paul... People in the Northeast are 2x more likely to vote for this Lying Politicians: The Worst Liars In American Politics 432.7k VOTES Do any politicians tell the truth anymore? Maybe, but you won't find them here. This list has the least trustworthy people i...
#472 of 1,452 Celebrity Death Pool 2018 477.7k VOTES Welcome to Celebrity Death Pool 2018! In increasingly uncertain times, there remains one constant in life - we all die. Cele...
#50 of 175 Celebrities You're Sick Of In 2018 64k VOTES Given it was quite the year for scandal and controversy, it's no surprise there are so many celebs the public is tired ...
#67 of 99 US Political Figures We Hate the Most: 2013 28.5k VOTES I'm starting this list with the political figures I hate the most, but I'm opening it to voting and to the public. Obviously...
#9 of 25 The Greatest Internet Heroes of 2012 1.8k VOTES Internet heroes are those people who inspire the masses, who use the Internet to do amazing or enlightening things and who m...
#40 of 49 People We Loved to Hate in 2011 2.7k VOTES The people we loved to hate in 2011 includes those that irritated us on reality television, those that refused to understand...
Famous People Named Ron 18.2k VIEWS List of famous people named Ron, along with photos. How many celebrities named Ronald can you think of? The famous Rons belo...
Famous People Named Ronald 14.7k VIEWS List of famous people named Ronald, along with photos. How many celebrities named Ron can you think of? The famous Ronalds b...
Here's What Every Notable Presidential Election Loser Ended Up Doing With Their Life 18.1k VIEWS You thought finding a job in your field was hard?  Try running for president. President is arguably one of the most dif...
Politicians Who Believe in Conspiracies 50.6k VIEWS Politicians who believe in conspiracies have become more and more numerous since the early 2000's, thanks to the rapid sprea...
Famous People Whose Last Name Is Paul 8.2k VIEWS Being a fairly common name, it's no surprise there are a lot of famous people with the last name Paul. Do you recognize all ...
34 Celebrities Who Were in Lambda Chi Alpha 8.6k VIEWS Since 1909, college men have proudly pledged Lambda Chi Alpha. It's one of the largest fraternities in the United States, ha...
15 Famous People Who Went to Med School 532.9k VIEWS Several famous actors, athletes, musicians, and politicians have attended medical school. Some of these celebrities gradua...
Celebrities Turning 85 In 2020 144 VIEWS Which stars become 85 year old celebrities in 2020? This list has all the singers, athletes, and actors born in 1935. A...

Ron Paul is also found on...