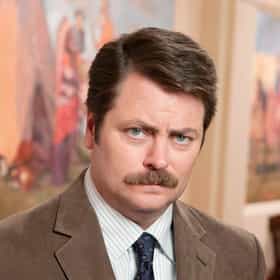 Ronald Ulysses "Ron" Swanson is a fictional character portrayed by Nick Offerman from the situation comedy television series Parks and Recreation on NBC, created by Greg Daniels and Michael Schur. In the series, Ron is the director of the parks and recreation department of fictional Pawnee, Indiana and the immediate superior of series protagonist Leslie Knope until Knope's election to the Pawnee City Council at the end of Season 4. In demeanor, political philosophy and work ethic, Knope and Swanson are very nearly polar opposites: where Knope is sunny and outgoing, decidedly liberal and constantly working, Swanson is distant, and as a staunch right-wing libertarian, is a ... more on Wikipedia

Ron Swanson is ranked on...

Ron Swanson is also found on...

All Parks And Recreation Characters