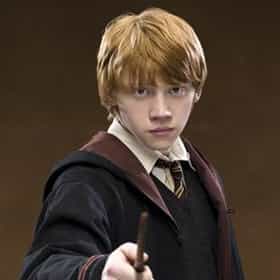 Ronald Bilius "Ron" Weasley is a fictional character in J. K. Rowling's Harry Potter series. His first appearance was in the first book of the series, Harry Potter and the Philosopher's Stone as the best friend of Harry Potter and Hermione Granger. He is a member of the Weasley family, a pure blood family, who reside in "The Burrow" outside Ottery St. Catchpole. Along with Harry and Hermione, he is a member of the Gryffindor house. Ron is present in most of the action throughout the series. ... more on Wikipedia

Ronald Weasley is ranked on...

#123 of 3,792 The Best Movie Characters of All Time 1M VOTES List of the best movie characters of all time, ranked by film buffs and people like you. This list includes performances by ...
#14 of 88 The Most Memorable Film Sidekicks Ever 34k VOTES A list of the most memorable movie sidekicks of all time. The collection of colorful and unique characters in the list below...
#652 of 818 The Most Annoying TV and Film Characters Ever 1.5M VOTES You know them. You hate them. Honestly, who knows why these characters even exist. Did someone think they were funny? M...
#15 of 16 The Most Powerful Wizards In The ‘Harry Potter’ Franchise, Ranked 8.9k VOTES Throughout the Harry Potter films, fans are introduced to a wide array of powerful witches and wizards, some of whom&nb...
#14 of 21 Every Patronus In 'Harry Potter,' Ranked By How Much You Wish It Was Yours 8k VOTES After sorting out how you feel about which Hogwarts house you're in and waving hello to whatever wand chooses you, cong...
#10 of 114 People who voted for Ronald Weasley... also upvote Harry Potter Franchise on The Best Movies of All Time The Greatest Harry Potter Characters, Ranked 270.9k VOTES The top Harry Potter characters come from a rich universe crafted on the page and adapted to the screen, giving us some of t...
#9 of 257 People who voted for Ronald Weasley... Women are 2x more likely to vote for this also upvote X-Men Franchise on The Best Superhero Movies Ever Made The Greatest Kid Characters in Film 155.7k VOTES List of the greatest kid characters in film. These onscreen children were the best movie personalities in the history of cin...
#13 of 34 The Best Members of Gryffindor 2.5k VOTES Who is the best and bravest Gryffindor from the Harry Potter franchise? There may be differences between the Harry Potter bo...
#72 of 72 Who Is the Most Annoying Kid in Pop Culture History? 36.7k VOTES Some of our favorite shows/films have something terrible in common... a little kid that, we assume, was put in to add vulner...
#7 of 104 People who voted for Ronald Weasley... People under 30 are 2x more likely to vote for this also upvote Harry Potter Franchise on The Most Rewatchable Movies Fictional Sidekicks You'd Most Want as a Best Friend 54k VOTES This is a votable list of fictional sidekicks you’d most want as a best friend. We’ve picked some of the best sidekicks fr...
#12 of 15 10+ Objectively Terrible Fictional Characters Who Totally Don't Deserve Their Happy Endings 15.8k VOTES Generally, moviegoers and TV viewers are force fed a protagonist that they're supposed to root for no matter what,...
#2 of 77 The All-Time Best Tween Movie Characters 1.5k VOTES The term ‘tween’ is often used to describe kids between nine and 12 years old. Tween characters are often overlooked in pop ...
#1 of 16 The Luckiest Characters In The ‘Harry Potter’ Film Franchise 392 VOTES Harry Potter may be one of the most beloved series of young adult novels ever written. J.K. Rowling was the first author to ...
#17 of 37 The Greatest Bangs in Movie History 10.7k VOTES Bangs. Fringe. Whatever you call it, that hair that hangs down over your forehead can be real hit or miss. People either lov...
The Cast of Harry Potter: Where Are They Now? 5M VIEWS When J.K. Rowling’s wildly-popular and bestselling Harry Potter book series was adapted for the screen, fans finally got to ...
#15 of 43 The Greatest Wizard Characters of All Time 6.5k VOTES For this poll we've created a list of the greatest wizards of all time, featuring wizards you know from movies, television, ...
#1 of 88 Fictional Characters Named Ron 1.6k VOTES List of notable fictional characters whose name is Ron, including photos when available. The fictional characters named Rona...
Which Harry Potter Character Are You, According To Your Zodiac Sign? 282.2k VIEWS J.K. Rowling's Wizarding World is a fascinating place full of characters we love and loathe, and it begs the ...

Ronald Weasley is also found on...