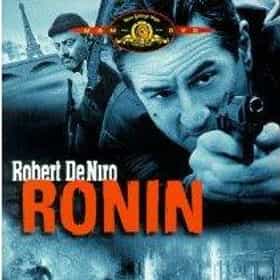 Ronin is a 1998 American spy thriller action film directed by John Frankenheimer and starring Robert De Niro, Jean Reno, Natascha McElhone, Stellan Skarsgård, Sean Bean, and Jonathan Pryce. Written by J.D. Zeik and David Mamet, the film centers on a team of hired operatives trying to take a mysterious and heavily-guarded case while navigating a maze of shifting loyalties and alliances. The film is noted for its car chases through Nice and Paris. ... more on Wikipedia

Ronin is ranked on...

#40 of 139 The Best Movies of 1998 14.8k VOTES A list of the best movies of 1998, from blockbusters like Armageddon to cult classics like The Big Lebowski. The '90s were a...
#29 of 327 The Best Free Movies On YouTube, Ranked 11.2k VOTES Looking for full-length movies on YouTube? Here over 100 free movies on YouTube that you can watch right now. The free full-...
#6 of 34 The Best Movies About Agents and Operatives 681 VOTES When highly trained spies set out to complete secret missions it's hard to know who to trust. The best movies about agents...
#422 of 735 The Greatest Action Movies of All Time 437.6k VOTES The greatest action movies of all time starring some of the best action stars to have ever fought on screen. The best action...
#14 of 163 The Best Spy Movies 58.9k VOTES On a secret mission to find a list of all the best spy movies ever made? Here it is! Many of these films are streaming on Ne...
#84 of 223 The Best R-Rated Action Movies of All Time, Ranked 34.8k VOTES Ready to marathon the best R-rated action movies? You do? Great! But now you have to decide which R-rated action movies qual...
#2 of 78 The Best Car Chase Movies Ever, Ranked by Fans 7.4k VOTES You know what makes the best car chase movies kick ass? It's not just the excitement or the tension. It's the payoff of when...
#14 of 55 The Best Movies That Are Based in Paris 550 VOTES The Eiffel Tower, romantic cafes, the Louvre Museum, Notre Dame Cathedral, Versailles Palace, Moulin Rouge – these are just ...
#4 of 55 The Best Jean Reno Movies 1.9k VOTES List of the best Jean Reno movies, ranked best to worst with movie trailers when available. Jean Reno's highest grossing mov...
#4 of 35 The Best '90s Spy Movies 696 VOTES The greatest ‘90s spy movies have the usual blend of comedy and intrigue. Against the backdrop of a changing world, ‘90s spy...
Premiere's The Must-Have Hollywood Movies DVD Collection 20.2k VIEWS Premiere's list of the top DVD's a movie-fan must own. These are movies you need to have in your collection if you consider ...
#1 of 14 The Best Action Movies Set in Paris 51 VOTES What do Harrison Ford, Kevin Costner, and Liam Neeson have in common? They've all made some of the best action movies set in...
#8 of 42 The Best Recent Spy Shows and Movies 685 VOTES The spy movie and film genre has included some of Hollywood's greatest films of all time. Classics like Dr. No, the first Ja...
#7 of 55 The Best R-Rated Spy Movies 637 VOTES List of R-Rated spy movies, ranked from best to worst with movie trailers when available. This list takes the best R-Rated s...

Ronin is also found on...