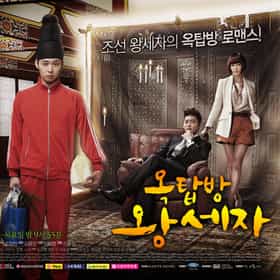 Rooftop Prince is a 2012 South Korean fantasy romantic comedy television drama, starring Park Yuchun, Han Ji-min, Jeong Yu-mi, Lee Tae-sung, Lee Min-ho, Jung Suk-won and Choi Woo-shik. It is about a Joseon crown prince who, after his wife dies mysteriously, time travels to the future where he encounters familiar faces, modern-day devices, and corporate intrigue. It aired on SBS from March 21 to May 24, 2012 on Wednesdays and Thursdays at 21:55 for 20 episodes. ... more on Wikipedia

Rooftop Prince is ranked on...

#44 of 205 The Best Korean Dramas of All Time 846.9k VOTES As seen in the new and latest Korean dramas, there are always things to expect from K-dramas: The boy that you lov...
#42 of 128 The Best K-Dramas to Watch on Viki 171.2k VOTES Korean drama fans rejoice! You know that you can only watch a select few of the best Korean dramas on YouTube and they alway...
#33 of 38 The Best Time Travel TV Shows, Ranked 3.8k VOTES Time travel shows tap into the viewer's wildest fantasies. Imagine if you could go back in time to undo a past tragedy, or&n...
#15 of 93 The Best SBS TV Shows 30.8k VOTES List of popular SBS shows, ranked from best to worst. This list of the top current and cancelled SBS TV series includes the ...