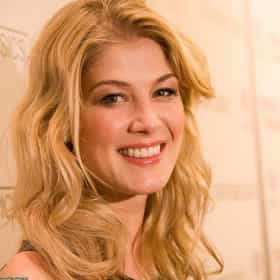 Rosamund Mary Ellen Pike (born 27 January 1979) is an English actress who began her acting career by appearing in stage productions such as Romeo and Juliet and Skylight. After her screen debut in the television film A Rather English Marriage (1998) and television roles in Wives and Daughters (1999) and Love in a Cold Climate (2001), she received international recognition for her film debut as Bond girl Miranda Frost in Die Another Day (2002), for which she received the Empire Award for Best Newcomer. Following her breakthrough, she won the BIFA Award for Best Supporting Actress for The Libertine (2004) and portrayed Jane Bennet in Pride & Prejudice (2005). Pike had film ... more on Wikipedia

Rosamund Pike is ranked on...

Rosamund Pike is also found on...