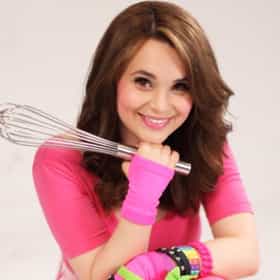 Rosanna Pansino (born Rosanna Reardon) is an American YouTuber, baker, actress and author. She is known for the cooking series Nerdy Nummies, one of the most well-known baking shows on YouTube. She also starred as Violet in the animated YouTube series Broken Quest and in the YouTube Premium series Escape the Night as The Jet Setter (season 3) and as The Socialite (season 4). She has Italian, Croatian, German, and Irish ancestry. ... more on Wikipedia

The Two Men Who Stole Rosanna Pansino's Heart 41 views Rosanna Pansino is a woman of many talents. She's a YouTuber, baker, author, singer, and actress. She's quite accomplished, ...

Rosanna Pansino is ranked on...

#17 of 60 The Most Popular YouTubers Of 2019 8.6k VOTES This list features the most popular YouTubers of 2019. PewDiePie is in the top slot, surprising no one. But does your favori...
#19 of 31 YouTubers Showing Off Their Ridiculous Mansions 296 VOTES Did you know that several YouTubers have bought giant houses off of their earnings? While some of that revenue comes fr...
#10 of 42 Which YouTube Star Would Be The Perfect Girlfriend? 4k VOTES In your perfect world, which female YouTube stars would you date? Complete with beauty, brains, and serious ambiti...
#21 of 58 The Most Popular YouTubers Of 2018 111k VOTES UPDATED: Check out the most popular YouTubers of 2019!  Much like social media platforms, YouTube has become a L...
#13 of 50 The Most Beautiful Female YouTubers 5.7k VOTES In a world filled with female internet influencers, we've put together a list of the prettiest YouTubers. From Jenna Marbles...