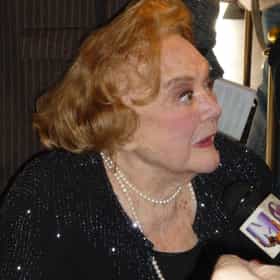 Rose Marie (born Rose Marie Mazzetta; August 15, 1923 – December 28, 2017) was an American actress, singer, comedian, and vaudeville performer with a career that ultimately spanned over nine decades — and included film, radio, records, theater, night clubs and television. As a child performer during the years just after the silent film era, she had a successful singing career as Baby Rose Marie. As an adult, she became one of the first major stars to be known simply by her first names. Marie was widely known for her role on the CBS situation comedy The Dick Van Dyke Show (1961–1966), as television comedy writer Sally Rogers, "who went toe-to-toe in a man’s world." Later she ... more on Wikipedia

Rose Marie is ranked on...

#272 of 311 Which Actor Would You Bring Back for One Final Movie? 182.9k VOTES We asked, you answered. Fans of the Ranker Facebook page chose which dead actors they’d like to bring back to life for just ...
#178 of 182 The Greatest American Actresses of All Time 175.8k VOTES It takes a lot to make a movie great. There has to be excellent writing, production, direction, editing, and of course, acti...
#42 of 868 Celebrity Death Pool 2016 370.1k VOTES Celebrity death pool 2016: Here's a large list of celebrities we think just might die this year. The only certainties in l...
#56 of 165 Celebrity Death Pool 2012 26.8k VOTES In a somewhat morbid twist on celebrity deaths, this list is a celebrity death pool. You can vote for the person who you thi...
The Locations of All Hollywood Walk of Fame Stars 417.9k VIEWS A list of stars on the Hollywood Walk of Fame, with photos. This list includes all television and movie stars. Acquiring a s...
Actors and Actresses Who Died in 2017 226.2k VIEWS Unfortunately, we say farewell to these actors and actresses who died in 2017. Whether these celebrity deaths were caused by...
Famous People Named Rose 21.6k VIEWS List of famous people named Rose, along with photos. How many celebrities named Rose can you think of? The famous Roses belo...
Famous People Named Rose 6.1k VIEWS If your name is Rose, then you're in some great company. Here's our list of the most famous people named Rose or Rosemary, i...

Rose Marie is also found on...