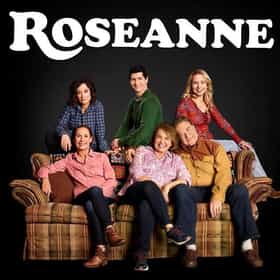 Roseanne is an American sitcom that was broadcast on ABC from October 18, 1988, to May 20, 1997. Starring Roseanne Barr, the show revolved around the Conners, an Illinois working-class family. The series reached #1 in the Nielsen ratings becoming the most watched television show in the United States from 1989 to 1990, and remained in the top four for six of its nine seasons, and in the top twenty for eight seasons, TV Guide rated "Roseanne" as one of the greatest shows of all time. In 1993, the episode "A Stash from the Past" was ranked #21 on TV Guide's 100 Greatest Episodes of All-Time. In 2002, Roseanne was ranked #35 on TV Guide's 50 Greatest TV Shows of All ... more on Wikipedia

Boy Meets World
The Juicy Behind-The-Scenes Stories From 'Roseanne' 154.2k views Roseanne is widely considered one of the greatest TV sitcoms ever. Millions of Americans have watched the Conner family dram...
The Final Season Of Roseanne Was So Bizarre, The Reboot Is Going To Completely Ignore It 17.2k views Roseanne was a big time hit sitcom for ABC, running nine seasons, from 1988 until 1997. The show quickly garnered mainstream...
The Best Episodes of 'Roseanne' 3.3k votes List of the best Roseanne episodes, as determined by voters like you. In the 90's Roseanne Barr and John Goodman were among ...
The Best Characters on Roseanne, Ranked 2.5k votes These are the best characters on Roseanne, ranked by viewers and fans. Ranked from best to worst, the list of Roseanne chara...
The Best Seasons of Roseanne 526 votes It was one of the most popular shows of the '90s, but what is the best season of Roseanne? Starring Roseanne Barr as a chara...
What The Cast Of 'Roseanne' Looks Like Over 20 Years Later 31.3k views No one would've guessed a year ago that we'd get to see the Roseanne cast today, here, now, living in our time and dealing w...
What The Cast And Crew Of 'Roseanne' Thinks About Its Cancellation 82.4k views Roseanne Barr has tweeted racist, Islamophobic, misogynistic, and transphobic things for years, and she's hardly the first p...
How the Cast of 'Roseanne' Aged from the First to Last Season 153 votes From dealing with family life in the Chicago suburbs to struggles at work, the characters of Roseanne captivated fans throug...

Roseanne is ranked on...

#116 of 2,297 People who voted for Roseanne... People in the Midwest are 2x more likely to vote for this The Greatest TV Shows Of All Time 1.5M VOTES Choosing the best TV shows of all time means taking into account the best TV dramas, the best TV comedies, the best cartoons...
#269 of 290 The Most Overrated TV Shows Of All Time 550.7k VOTES List of the most overrated TV shows of all time, ranked by fans, critics, and people like you. Ever since the dawn of the ...
#85 of 158 Shows with the Best Freakin' Series Finales of All Time 264.6k VOTES This list of the best series finales in television is a somber reminder that no matter how much you love a TV character or a...
#10 of 58 The Greatest Sitcoms of the 1990s, Ranked 107.9k VOTES It’s hard to choose the best sitcoms of the ‘90s: so many quality theme songs, so many outlandish misunderstandings, and so ...
#3 of 141 The Worst TV Series Finales Ever 164.7k VOTES The worst final episodes of great TV shows have a history almost as old as TV itself. Whenever an audience becomes so invest...
#46 of 482 People who voted for Roseanne... also upvote The Fockers Franchise on The Absolute Most Hilarious Movies Ever Made also upvote Men in Black Franchise on The Best Movies of All Time The Funniest TV Shows of All Time 538.1k VOTES   The funniest TV shows ever range from some of the best TV shows of recent memory to some of the best TV shows of al...
#96 of 216 The TV Shows with the Best Writing 68.8k VOTES What are the best written TV shows of all time? The Writers Guild of America (WGA) and TV Guide recently compiled its list o...
#94 of 271 The Best Female-Led TV Shows 25.7k VOTES While society has by no means reached actual equality, in the last few years television viewers have started to see an uptic...
#8 of 66 The Best ABC Shows of All Time 20.2k VOTES   List of the best ABC shows of all time, ranked by fans who watch them live or as re-runs. Since its acceptance into...
#81 of 169 The TV Shows Most Loved by Hipsters 29k VOTES List of TV shows hipsters love, currently running and from the past. Perhaps a TV-watching hipster seems like an oxymoron; a...
#2 of 17 17 Beloved '90s Shows That Ended In Really Weird Ways 6k VOTES There's a lot of classic '90s TV that's bad, a lot that's brilliant, and a lot that managed to be both. Whether it was due t...
#13 of 114 The Best Shows About Families 14.2k VOTES The best shows about families are those sitcoms and family shows that give us a break from our own families and give us a pe...
#33 of 47 The Best Single Woman Sitcoms 5.1k VOTES List of the best single woman sitcoms. The greatest television sitcoms starring freedom-loving females in the lead are all r...
#8 of 37 What TV Shows Best Represent American Life Today? 10.5k VOTES Is there such a thing as "the" American experience? If so, where can a person see it? In novels? Films? Television...
#8 of 39 The Best Sitcoms Named After the Star 1.1k VOTES This list contains information about sitcoms named after the star, loosely ranked by user votes. The best sitcoms named af...
#58 of 1,328 The Best Guilty Pleasure TV Shows 19.7k VOTES List of the best guilty pleasure TV shows, past and present, including sitcoms, dramas, reality shows, and game shows. These...
#18 of 40 The Best Golden Globe Winning Comedy Series 1.2k VOTES Every year, the Hollywood Foreign Press recognizes the best of the best in movies and television at the Golden Globe Awards ...
#2 of 21 The Best TV Revivals Starring Original Casts 723 VOTES It's always exciting to see a beloved television show come back to the airwaves, especially in the case of revivals wit...
#14 of 36 The Worst TV Reboots 772 VOTES This list contains information about the worst TV reboots, ranked from the very worst to the just semi-terrible by your vote...
#8 of 43 What to Watch If You Love 'The Simpsons' 114 VOTES The Simpsons is an animated comedy that garnered the love and affection of hordes of fans, but if you’ve finished watching t...
#40 of 510 The Best '80s TV Shows 208.8k VOTES List of the best television shows from the '80s, as ranked by television fans. In the 1980s, sitcoms were among the most tal...
#9 of 242 The Best 1990s ABC Shows 13.9k VOTES Go back to the days of acid wash jeans with this list of '90s ABC shows, ranked from best to worst by nostalgic TV viewers. ...
#10 of 52 The Best TV Shows Starring Stand-Up Comics 895 VOTES Many people pursue stand-up comedy with the hopes of one day getting their own TV show. After years of paying their dues in ...
What TV Husbands And Wives Really Thought Of Each Other 15.9k VIEWS As entertaining as TV shows are, even more goes on behind the scenes, especially where the actors' personal relati...
What Was The Most Popular TV Show The Year You Were Born 101.3k VIEWS Television is a big part of our lives. Most people spend a few hours a night sitting in front of their idiot box, and it's e...
#18 of 36 The Greatest TV Shows About Parenting 1k VOTES Which TV shows about parenting do you think are best? While there are countless manuals, books, and detailed guides people c...
#16 of 41 The Greatest TV Shows About Marriage 455 VOTES There's no shortage of stories to tell about marriage. Since the beginning of television, nearly every series has dealt with...
#12 of 23 The Best Spin-Offs of the '90s 1.8k VOTES What are the best 1990s spin-offs? Well, here are they are ranked from best to worst by user votes. Spin-offs of course mean...

Roseanne is also found on...