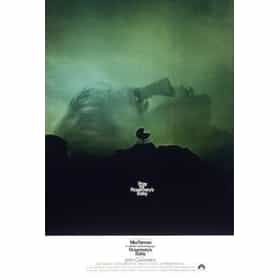 Rosemary's Baby is a 1968 American psychological horror film written and directed by Roman Polanski, based on the bestselling 1967 novel of the same name by Ira Levin. The cast includes Mia Farrow, John Cassavetes, Ruth Gordon, Ralph Bellamy, Maurice Evans, Sidney Blackmer, and Charles Grodin. It was produced by William Castle. Farrow plays a pregnant woman who fears that her husband may have made a pact with their eccentric neighbors, believing he may have promised them the child to be used as a human sacrifice in their occult rituals in exchange for success in his acting career. Rosemary's Baby was the second film in Polanski's "Apartment Trilogy", preceded by Repulsion and ... more on Wikipedia

All The Spooky Evidence That Rosemary’s Baby Is, In Fact, A Cursed Movie 17k views In the 1968 film Rosemary’s Baby, a failing actor agrees to give up his wife’s womb to Satan so he can have a taste of fame....

Rosemary's Baby is ranked on...

Rosemary's Baby is also found on...