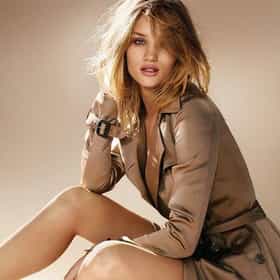 Rosie Alice Huntington-Whiteley (born 18 April 1987) is an English model, actress, designer, and businesswoman. She is best known for her work for lingerie retailer Victoria's Secret, formerly being one of their brand "Angels", for being the face of Burberry's 2011 brand fragrance "Burberry Body", for her work with Marks & Spencer, and, most recently, for her artistic collaboration with denim-focused fashion brand Paige.Moving into acting, she became known for her supporting roles as Carly Spencer in the 2011 film Transformers: Dark of the Moon, the third installment in the Transformers film series, and as The Splendid Angharad in the 2015 film Mad Max: Fury ... more on Wikipedia

Rosie Huntington-Whiteley is ranked on...

#342 of 3,307 People who voted for Rosie Huntington-Whiteley... Men are 5x more likely to vote for this People in the Midwest are 2x more likely to vote for this The Most Beautiful Women of All Time 132.1M VOTES Here are the most beautiful women of all time ranked not on looks alone, regardless of their talent. Thi...
#94 of 146 The Most Beautiful Women Of 2020, Ranked 3.7k VOTES From classic beauties to drop dead gorgeous models, this list features the hottest celebrity women of 2020. Some of the most...
#32 of 181 The Most Beautiful Women Of 2018 257.5k VOTES UPDATED: Check out the hottest celebrity women of 2019! Here are the most beautiful women who won our hearts in 2018....
#28 of 162 The People's 2011 Maxim Hot 100 List 102.4k VOTES Each year, Maxim magazine chooses the most beautiful women to feature on their coveted list of the 100 hottest girls in the ...
#53 of 186 People who voted for Rosie Huntington-Whiteley... also upvote Harry Potter Franchise on The Most Rewatchable Movies also upvote X-Men Franchise on The Best Movies Based on Marvel Comics The Best Living English Actresses 41.7k VOTES Hailing from England, these women in film are acting circles around some of their male counterparts. These actresses from En...
#14 of 22 The Most Beautiful Women with Blue Eyes 159.8k VOTES This is a list of the most attractive female celebrities with blue eyes. These blue-eyed stars, which happen to be...
#6 of 233 Victoria's Secret's Most Stunning Models, Ranked 352.7k VOTES List of all Victoria's Secret Models who ever walked the runways or posed in those ubiquitous Victoria's Secret catalogs, wi...
#11 of 24 Beautiful Celebrity Women with Cute Dimples 49.3k VOTES This list has all the female celebrities with the cutest dimples. These adorably dimpled Hollywood stars, which happen ...
#4 of 80 The Most Stunning English Fashion Models 93.8k VOTES This is a list of English models born in England and female fashion models of English descent. These women from cities ...
#26 of 327 Who Should Be in the 2013 Maxim Hot 100? 134.7k VOTES Maxim Magazine is accepting votes for their 2013 Hot 100 list, but before that's published the Ranker Community is going to ...
#37 of 48 The Best Celebrity Vlogs On YouTube 11.2k VOTES From Hollywood to YouTube, here are the best celebrities who have YouTube channels. Unlike the most popular Y...
#4 of 20 Celebrities in Dolce & Gabbana Dresses 1k VOTES Italian designers Domenico Dolce and Stefano Gabbana are one of the few fashion duos to take the fashion community by storm....
Jason Statham Loves and Hookups 17.6k VIEWS Who is Jason Statham dating? Many famous women have dated Jason Statham, and this list will give you more details about thes...
Famous People Named Rosie 5.9k VIEWS List of famous people named Rosie, along with photos. How many celebrities named Rosie can you think of? The famous Rosies b...

Rosie Huntington-Whiteley is also found on...