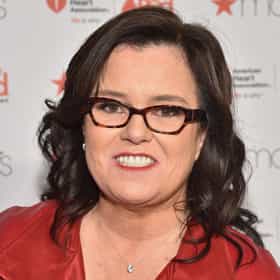 Roseann O'Donnell (born March 21, 1962) is an American comedian, actress, author, and television personality. She began her comedy career as a teenager and received her breakthrough on the television series Star Search in 1984. After a series of television and film roles that introduced her to a larger national audience, O'Donnell hosted her own syndicated daytime talk show, The Rosie O'Donnell Show, between 1996 and 2002, which won several Daytime Emmy Awards. During this period, she developed the nickname "Queen of Nice", as well as a reputation for philanthropic efforts. From 2006 to 2007, O'Donnell endured a controversial run as the moderator on the daytime talk show The ... more on Wikipedia

Rosie O'Donnell is ranked on...

Rosie O'Donnell is also found on...