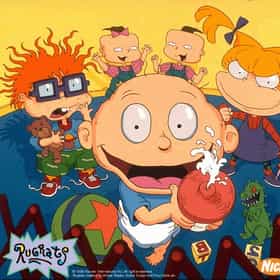 Rugrats is an American animated television series created by Arlene Klasky, Gábor Csupó and Paul Germain for Nickelodeon. The show focuses on a group of toddlers, most prominently Tommy, Chuckie, Phil, Lil and Angelica, and their day-to-day lives, usually involving common life experiences that become adventures in the babies' imaginations. Adults in the series are almost always unaware of what the children are up to; however, this only provides more room for the babies to explore and discover their surroundings. The series premiered on August 11, 1991, as the second Nicktoon after Doug and preceding The Ren & Stimpy Show. Production initially halted in 1993 after 65 ... more on Wikipedia

The Powerpuff Girls
20 Things You Didn't Know About Rugrats 885.4k views Rugrats was one of the most iconic, influential, and memorable cartoons of all time. In the heyday of Nickelodeon and Nickto...
The Best Rugrats Episodes of All Time 5.6k votes List of the best Rugrats episodes, as voted on by other fans of the series. With so many memorable episodes of the show, it'...
The Best Rugrats Characters of All Time 3.6k votes Rugrats was arguably one of the best '90s Nicktoons around, and this list of the best Rugrats characters will prove it! Ther...
The Most Messed Up Things Angelica Did on Rugrats 7.6k votes If you grew up in the '90s you probably watched Rugrats, and were enamored with the adventures of Tommy, Chuckie, Phil, Lil,...
All The Rugrats Are Dead (Except For One) And It's Obvious Once You Pay Attention 956.9k views Rugrats is about babies getting into shenanigans and is one of the greatest '90s cartoons of all time. But what if that warm...
The 20 Creepiest Rugrats Moments of All Time 8.5k votes For a show that was supposed to be for children, Rugrats had almost too many creepy moments to count. Between the monsters...
Tommy Attempting To Get Rid Of Dil In 'The Rugrats Movie' Is Only Part Of The Weirdness 16.2k views After five seasons, the creators behind Rugrats took the classic Nickelodeon cartoon to the big screen for The Rugrats Movie...
Which 'Rugrats' Character Are You Based On Your Zodiac Sign? 9.1k views Whether it's intentional or not, every '90s kid knows who the Rugrats are. From the brotherly love evidenced by Tommy and Di...
This Horrifying Rugrats Theory Actually Makes A Lot Of Sense 794 views Cynthia is more than just a really cool dancer...
The Best Angelica Pickles Quotes From 'Rugrats' 275 votes The best Angelica Pickles quotes really show why she is considered to be one of the meanest, most evil characters of all tim...

Rugrats is ranked on...

Rugrats is also found on...