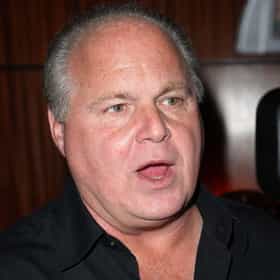 Rush Hudson Limbaugh III ( LIM-baw; born January 12, 1951) is an American radio talk show host and conservative political commentator. He resides in Palm Beach, Florida, where he broadcasts The Rush Limbaugh Show. According to December 2015 estimates by Talkers Magazine, Limbaugh has a cume (cumulative weekly audience) of around 13.25 million unique listeners (listening for at least five minutes), making his show the most listened-to talk-radio program in the US.Since he was 16, Limbaugh has worked as a radio personality, originally as a disc jockey. His talk show began in 1984 at Sacramento, California radio station KFBK, featuring his ongoing format of political commentary and ... more on Wikipedia

Rush Limbaugh is ranked on...

#98 of 1,041 Celebrity Death Pool 2020 102.9k VOTES They may be beloved performers, award winners, or game changers, but no matter how famous, you can’t escape death. This cele...
#28 of 524 Annoying Celebrities Who Should Just Go Away Already 1.2M VOTES The most annoying celebrities, ranked by entertainment fans themselves. These annoying celebs are obnoxious, overexposed, ...
#1 of 152 The Most Ridiculous Political Pundits 166.6k VOTES This is a bipartisan list of the most over-the-top, spittle-stained, fist-thumping, hyperbolic political pundits of all ti...
#49 of 113 The Most Influential Contemporary Americans 142.1k VOTES A list of the Americans who have had the most central influence on, or importance to, the modern era. This would include Ame...
#8 of 102 The Lamest Authors of All Time 71.4k VOTES There are always going be writers (and books) some folks just don't like. Books, and the skills of the people who write th...
#35 of 113 People who voted for Rush Limbaugh... People on the West Coast are 2x more likely to vote for this People We Loved to Hate in 2013 40.4k VOTES These are the People we loved to hate in 2013. This list includes a slew of shocking, disheartening and downright dirty happ...
#9 of 101 People We Loved to Hate in 2012 12.4k VOTES People we loved to hate in 2012 include popular names in sports, entertainment, and, of course in an election year, politics...
#23 of 98 US Political Figures We Hate the Most: 2013 28.6k VOTES I'm starting this list with the political figures I hate the most, but I'm opening it to voting and to the public. Obviously...
#17 of 49 People We Loved to Hate in 2011 2.7k VOTES The people we loved to hate in 2011 includes those that irritated us on reality television, those that refused to understand...
#26 of 55 The Most Influential People of 2012 7.2k VOTES The most influential people of 2012 include world leaders, CEOs, athletes, actors, musicians and many others who made an imp...
#7 of 8 Who Is the Worst Person of the Week? (May 30-June 5) 186 VOTES Like a dull knife that just ain't cuttin', these candidates for Worst Person of the Week are talkin' loud and sayin' nothin'...
Here's a List of Every Known Republican Celebrity 1.8M VIEWS Conservative celebrities - this list of Republican celebrities has over 400 celebrities who are Republicans. What celebritie...
Famous People with Tinnitus 271.6k VIEWS Hear a ringing in your ears? The celebrities on this list of famous people with tinnitus (which is loosely ranked by fame an...
100 Highest Paid Celebrities in the World: Power List 2012 30k VIEWS Who are the 100 highest paid celebrities in the world? The celebrity power list of 2012 includes rich and famous people from...
35 of the Most Famous ENTJs 68.9k VIEWS Several famous actors, actresses, and politicians are believed to be ENTJs (Extraverted Intuitive Thinking Judging). ENTJs a...
Celebrities Who Went to The Meadows Rehab 20.2k VIEWS This list contains information about celebrities who went to the Meadows treatment center, loosely ranked by fame and popula...
100 Most Popular Celebrities: Radio & TV Survey Rankings 8.7k VIEWS Using figures from the Forbes Celebrity 100, the richest actors, actresses, athletes, musicians and media power players are ...
The Highest Paid Celebrities of 2013 20.2k VIEWS The highest paid celebrities of 2013 range from the top stars in music, movies, television, news and sports, but all have on...

Rush Limbaugh is also found on...