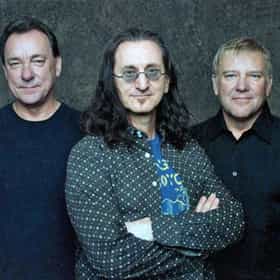 Rush was a Canadian rock band consisting of Geddy Lee (bass, vocals, keyboards), Alex Lifeson (guitars), and Neil Peart (drums, percussion). Formed in 1968, the band went through several configurations until arriving at its longest and classic line-up when Peart replaced original drummer John Rutsey in July 1974, two weeks before the group's first tour of the United States. Rush is known for its musicianship, complex compositions, and eclectic lyrical motifs drawing heavily on science fiction, fantasy, and philosophy. The band's musical style has changed several times over the years, from a blues-inspired hard rock beginning, later moving into progressive rock, and including a period ... more on Wikipedia

Rush is ranked on...

#29 of 2,211 People who voted for Rush... also upvote Led Zeppelin IV on The Greatest Albums of All Time also upvote The Dark Side of the Moon on The Greatest Albums of All Time The Best Rock Bands of All Time 3.3M VOTES Update: Follow Ranker's official New Rock 2020 playlist on Spotify! There are thousands of rock bands that have ...
#346 of 358 The Worst Rock Bands of All Time 749.5k VOTES Here they are: the absolute worst rock bands in history, ranked from the most awful bands to the kind of okay but still pret...
#45 of 81 The Best Trios Of All Time 34.2k VOTES Remember the old phrase, "Three's a crowd?" Sure, it's earnest when you're dealing with a tandem bicycle or t...
#10 of 620 The Greatest Live Bands of All Time 333.2k VOTES List of the greatest live bands or artists of all time, created and ranked by music fans worldwide asks the question "w...
#156 of 367 The Best Pop Artists of the 1980s 388.2k VOTES The 1980s was a huge decade in terms of breaking pop stars. 80s artists benefited from the rising popularity of cable televi...
#98 of 502 The Greatest Musical Artists of the '80s 574.4k VOTES   The greatest and most prolific artists of music's most colorful decade are remembered on this list. This list is ba...
#12 of 47 The Greatest Artists Who Have Never Won a Grammy 15.8k VOTES Every year since 1959, the Grammy Awards recognize and honor the best musical achievements, performances, and artists. Somet...
#21 of 69 The Best Stoner Music 8.8k VOTES Whenever people sit back, light a fat one and want to chill on their couch, it's likely that they'll want throw on a great a...
#19 of 66 The Strangest Opening Act Bookings Ever 5.8k VOTES Some of the strangest opening act bookings no doubt leave music fans scratching their collective heads. Most of the time, an...
#6 of 318 The Best Progressive Rock Bands/Artists 164.3k VOTES Loved by many and hated by some, progressive rock - or prog rock - is one of the most popular subgenres of rock music. Meldi...
#28 of 351 The Best Progressive Metal Bands 37.7k VOTES Update: Follow Ranker's official New Metal 2020 playlist on Spotify! The beauty of progressive metal is that it ...
#8 of 208 The Best Hard Rock Bands/Artists 205.6k VOTES Hard rock is a genre that started with bands like Cream, Mountain, Steppenwolf, and Grand Funk in the late 1960s and early 1...
#2 of 53 The Best Rock Trios Of All Time 3.2k VOTES Rock fans, this list is for you. We’re ranking the best trios in rock music. Is it The Police - or are you more of a Nirvana...
#7 of 77 The Best Geek Rock Bands 12.1k VOTES Though it's not quite clear when the origins of geek rock started, by the late 1990s, the genre became widely accepeted comm...
#8 of 76 The Best Rock Opera Bands/Artists 4.3k VOTES Rock opera artists list, with photos, ranked best to worst by votes. List of good rock opera bands includes a filter so you ...
#59 of 91 The Best Symphonic Rock Bands 33.2k VOTES Symphonic rock is often times confused with progressive rock and with good reasons. Many of the best symphonic rock overlap ...
#26 of 118 The Best Psychedelic Pop Bands/Artists 3.9k VOTES Implementing elements of the sounds of psychedelic folk and psychedelic rock, psychedelic pop has become one of the mos...
Superstar Bands That Actually Formed in High School 17.8k VIEWS High school bands are nothing new—jamming in the garage after class is a classic teenage pastime. Only a handful of bands fo...

Rush is also found on...