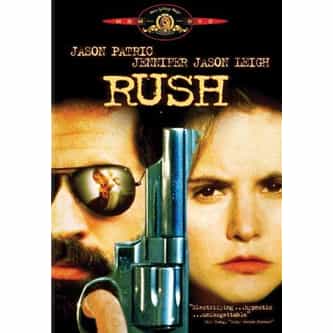 Tagline
How far do they go before they've gone too far?

Rush is a 1991 American crime/drama film directed by Lili Fini Zanuck and based on a novel written by Kim Wozencraft. It stars Jennifer Jason Leigh and Jason Patric as two cops in the 1970s who go in too deep on a case: a narcotics detective and his inexperienced partner go after an elusive drug dealer. They become drug addicts themselves and, failing to get the evidence they need, use falsified evidence. ... more on Wikipedia

Rush IS LISTED ON