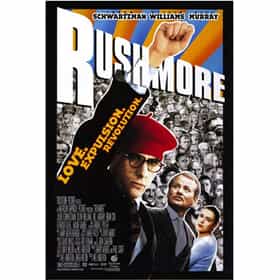 Rushmore is a 1998 comedy-drama film directed by Wes Anderson about an eccentric teenager named Max Fischer, his friendship with rich industrialist Herman Blume, and their mutual love for elementary school teacher Rosemary Cross. The film was co-written by Anderson and Owen Wilson. The soundtrack was scored by regular Anderson collaborator Mark Mothersbaugh and features several songs by bands associated with the British Invasion of the 1960s. The movie helped launch the careers of Anderson and Schwartzman, while establishing a "second career" for Murray as a respected actor of independent cinema. Rushmore also won Best Director and Best Supporting Male awards at the 1999 ... more on Wikipedia

Rushmore is ranked on...

Rushmore is also found on...