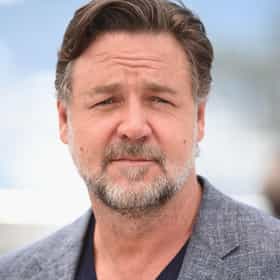 Russell Ira Crowe (born 7 April 1964) is an actor, film producer and musician. Although a New Zealand citizen, he has lived most of his life in Australia. He came to international attention for his role as the Roman General Maximus Decimus Meridius in the historical film Gladiator (2000), directed by Ridley Scott, for which Crowe won an Academy Award, a Broadcast Film Critics Association Award, an Empire Award and a London Film Critics Circle Award for best actor, along with ten other nominations in the same category. Crowe's other award-winning performances include portrayals of tobacco firm whistle-blower Jeffrey Wigand in the drama film The Insider (1999), and John F. Nash in the ... more on Wikipedia

Russell Crowe is ranked on...

Russell Crowe is also found on...