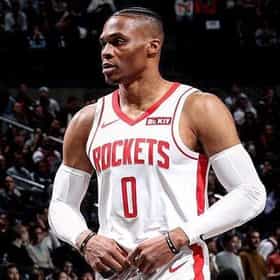 Russell Westbrook III (born November 12, 1988) is an American professional basketball player for the Houston Rockets of the National Basketball Association (NBA). He is an eight-time NBA All-Star and earned the NBA Most Valuable Player Award in the 2016–17 season. He is also an eight-time All-NBA Team member, led the league in scoring in 2014–15 and 2016–17, and won back-to-back NBA All-Star Game Most Valuable Player awards in 2015 and 2016. In 2017, the year he won the league MVP award, Westbrook became one of two players in NBA history to average a triple-double for a season, along with Oscar Robertson in 1962. He also set a record for the most triple-doubles in a season, with 42. He ... more on Wikipedia

The Best Jordan "Why Not?" Zer0.2 Colorways, Ranked 612 votes The track record of Russell Westbrook shoes features a combination of unique designs and successful results for the Jordan b...

Russell Westbrook is ranked on...

Russell Westbrook is also found on...